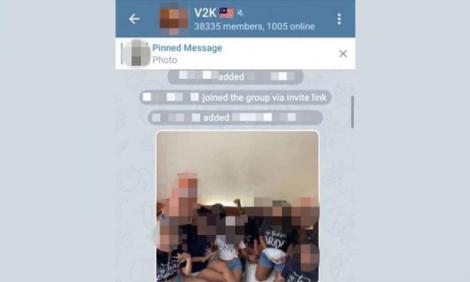 Are Malaysians a society of sexual predators?
By Zan Azlee

I am shocked at how there really has been no media and public attention given to the recent discovery of a Telegram group chat known as V2K which distributes photographs of women and girls from different social media platforms, without their consent, to its 35,000 members.

Of course, there have been stories carried here and there, but overall, people don’t seem to be interested in the story. It seems like everyone is still obsessing over how Anwar Ibrahim is going to show that he has the numbers when he meets the Yang di-Pertuan Agong next week.

Sure, the state of our government is pretty significant and I understand that we want to know more. However, the fact that a chat group like V2K exists (and it has been discovered that there are more groups like that locally) is also very worrying.

It also concerns me when our society does not give importance to an issue like this. Read the handful of reports talking about the group chat and notice that it is alleged that authorities such as the police are also among the members in the group.

According to women who have found that their pictures have been distributed in the group, they have even been threatened by the members for wanting to expose the group and warned not to make any reports. However, reports have been made.

This is disgusting on so many levels. In fact, many of these women found out that their pictures were in the group from people who are in the group. And they know these people personally! Or at the very least, they are friends of friends.

What does this mean? So these same people who are in these groups think that it is all okay until they see someone they know personally and only then it stops being okay? That doesn’t make it right, does it?

Are Malaysians a bunch of sick perverts who prey on unwilling and unknowing victims? And even when society finds out about it, it doesn’t look like anyone is outraged at all. It just seems to be like business as usual and everyone is saying, “Oh, it’s been reported. Move on then.”

Remember when math student Nur Fitri Azmeer Nordin (above), who was studying in London was arrested for being in possession of child pornography? He was deported to Malaysia and our authorities decided not to take any action on him. He seems to be continuing life like nothing happened.

I have two daughters and my elder one is fast approaching the age where social media starts becoming a part of her life. So sexual crime issues are a big concern in my life. Look, even if I didn’t have daughters, it would still be a big concern for me.

My wife and I do the best we can to educate her on the dangers online. She seems to understand the issues (as much as a nine-year-old can) and we are constantly encouraging and reminding her that she can, and should always, come to us if she has any questions or feels in doubt.

But if we live in a society that takes these issues and incidents lightly, then I am afraid that no matter what I do, it will never be enough to protect my children. And neither will anyone feel protected and safe in Malaysia.

I pray that the authorities give utmost priority to investigate the Telegram V2K group. An organised group of sexual predators like this is dangerous and could be a trigger for worse things to happen. I also think the public needs to be a bit more outraged at this.

One response to “Are Malaysians a society of sexual predators?”

What the hell just happened?? 😂😂😂 #Basketball #BBallManiax #FridayNightLights
I don't know about all of you, but at the moment, I can’t even differentiate the coalitions that exist in our Parliament. How ahh like that??
Yesterday was a day of multiple live TV crosses for @trtworld about former Malaysian Prime Minister #NajibRazak’s appeal against his 12 year prison term and RM210 million fine conviction in relations to the #1MDB corruption scandal. #Journalism #Journalist #JournaDad #FatBidin #TRTWorld
What can be done to eliminate race-based politics? Nothing systemic really because these parties should have the right to exist as well in a democracy. So how?
Wedding anniversary week over and all I did was enjoy the ride!
Zan’s #GoPro or @cager14’s #iPhone?? Vote now, but only if you’re 21 or above... because #Undi18 tak lepas lagi! #BBallManiax #FridayNightLights #Basketball
The reasons of many of the people who have told me that they are sceptical and will be holding out from being vaccinated is quite suspect to me. #Covid19 #Coronavirus #Vaccine #Vaccination
Exploring nearby gems and we found @wetworld_waterparks just 10 minutes away in our backyard! Actually, I’ve been driving past it for more than 20 years but have never been! Haha! Good wholesome fun mafakas! (Lousy food though! 😂😂) #TheBustAzlees #TheBustAzleeMafakas