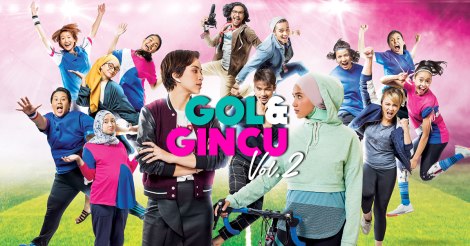 Diverse female representation in Gol & Gincu 2
By Sheril A. Bustaman

I wish I could say that the Malaysian mainstream film industry was representative of all voices and communities, but sadly that is not the case. In order to cater to the masses, a lot of the films share similar themes and ideologies with recycled tropes that are not in tune with the collective Malaysian society of today. In 2018, misogyny and degradation of women still feature as common theme in films, from the normalisation of rape in Osman Ali’s Langsuir to the gendering and objectification of cars in KRU’s Wheely. This is what makes Gol & Gincu 2 such a breath of fresh air despite being a sequel to the 2005 film Gol & Gincu.

Directed by Umi Salwana Omar, Gol & Gincu 2 tells the tale of two different women (played by Diana Danielle and Ummi Nazeera) who meet in university and are forced to band together to help save a home for troubled teens. At first glance, the film seems like a typical coming-of-age sisterhood type film, where the characters develop to like each other and friendship ends up reigning supreme over all, superseding any hardship that might befall the protagonists and their supporting characters. However, a closer look will unearth great hints of feminism embedded within the story.

It is firstly displayed through the all the female characters in the film. From the girls within the 3R home to the prolific futsal coach (played by Sazzy Falak, who won Best Supporting Actress at the 19th Malaysian Film Festival for her role in the first Gol & Gincu back in 2005), each character has her own unique development arch that creates a diverse spectrum of female representation. Almost symbiotically, these unique characters then blend together to form a quirky support system which is the key to the film’s resolution and their success. Instead of displaying stereotypes of cliques within a sisterhood, Gol & Gincu 2 brings together women and girls from different walks of life and celebrates each of them not just for their uniqueness, but also for their flaws which make them human.

The male representation to the film also lends itself to the feminist element of the movie. The three key male characters (played by Syafiq Kyle, Aedy Ashraf & Jad Hidhir respectively) are presented to the audience in the form of a campus news team that cover the lead female characters and report on their community service progress at the 3R home. While the news team constantly provides criticism to both the lead females, it is clear that the power dynamics within the film is still leaning towards the leads as they never once falter from their personalities to dumb themselves down for these male characters. The development of the male characters to the point where they realize that pitting females against each other to sensationalize news is also a nod towards a more feminist ideology and is refreshing to see in a Malaysian film.

Finally, the biggest display of feminism within Gol & Gincu 2 comes from the plot and the director itself. The plot of two women coming together to help save a shelter for troubled female teens is already milestones more feminist compared to the first Gol & Gincu plot line where a woman is trying to win her ex-boyfriend back by learning to play his favourite sport. The hiring of Umi Salwana Omar, a female director as opposed to her predecessor Bernard Chauly also gives the film the added advantage of being produced through a female lens which elevates its level of feminism as well. Where feminism and girl power is implied through the first Gol & Gincu, it is unapologetic and shines through in this sequel and is impossible to miss.

Granted, Gol & Gincu 2 is not without its faults. The acting of the younger actresses sometimes feels a bit two dimensional, and the execution of the story was a bit slow at the beginning, creating a stark difference between the first and second half of the film. The performances of seasoned actresses such as Sharifah Amani (playing Kak Jijie, the principal of the home) and the previously mentioned Sazzy Falak (as the futsal coach) carried most of the show. There was also no build up towards the happy resolution that the film dissolves towards which makes it hard for the audience to feel the full impact of emotion that the characters set out to invoke.

That being said, one must appreciate the fact that Gol & Gincu 2 adds a fresh and refreshing way of looking at women in Malaysia and is by far the only representation of females that don’t normalize rape, objectify women or abuse them in some way. Gol & Gincu 2 brings to the screen a display of women and girls who have been through different forms of adversity, yet manage to rise through the strength they draw from the friendship that they’ve cultivated with each other. It does not show women backbiting or fighting over a man, neither does it center a male character around the women’s existence. As a Malaysian woman, I commend and thank the creators of Gol & Gincu 2 for the fresh perspective and representation of women in cinema, and hope that this paves the way for more diverse female narratives in the future.

Interested in making your own films? Then why not get Zan Azlee’s book ‘Guide to indie filmmaking‘ today? 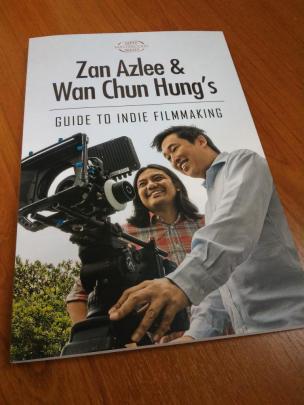