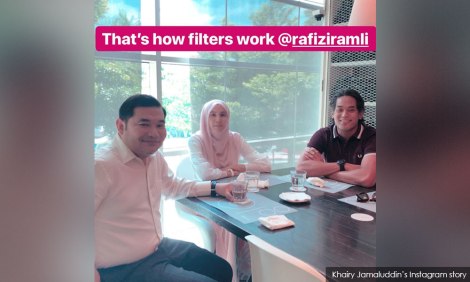 I might know what you did on your last lunch date!
By Zan Azlee

Three people who have always been the symbol of youth, change and reform in Malaysian politics in the past five to 10 years or so have been subject to a lot of attention recently. Yes. I am referring to the golden triage that is Nurul Izzah Anwar, Khairy Jamaluddin and Rafizi Ramli.

Recently, they have been seen having lunch twice now. Many would say that this is just some sensational news that can be brushed off because we need a little bit of gossip drama in politics. It’s just something juicy to talk about. But maybe there is something more there.

We all know how Nurul started. While still a student, her father, then deputy prime minister Anwar Ibrahim was sacked and arrested. By having to fight for her father, she was thrown into politics and eventually became a powerhouse in the opposition.

Khairy was the son-in-law of the country’s fifth prime minister Abdullah Ahmad Badawi. He still is Abdullah’s son-in-law, but the old man is no longer the prime minister. Khairy rose quite fast, of which many people believe is due to him marrying up!

Rafizi came to the fore as a whistle-blower. He was never afraid of digging up dirt on his political rivals who were mainly in the government at the time. So much so that he himself have been charged with exposing confidential information.

The one that actually sticks out among the three is Khairy because he is from Umno and was in the previous government. Nurul and Rafizi are from PKR, which is only now part of the new coalition government ever since the general election last May.

Now, since the May election, it can be said that things have gone a little bit down south for these three individuals. Khairy is no longer a minister and he lost his bid in trying to be the president of Umno in the last party elections.

Rafizi had a guilty verdict in a case that involved him having confidential information and could not defend his parliamentary seat. He also lost in the party elections when he ran for the deputy president post.

Nurul’s situation would be the most unfortunate. She is a senior leader in her party (vice-president, nonetheless) and is a three-term member of parliament. When her coalition won the government, many expected her to be on the cabinet.

However, due to having to avoid accusations of nepotism, she was not appointed nor given any other post in the government (her mother Dr Wan Azizah Ismail is the Deputy Prime Minister while her father, apparently, is “prime minister-in-waiting”).

Basically, these three have been in political oblivion since last May. I can imagine that this is frustrating seeing that they have always been at the forefront of trying to change. Nurul and Rafizi worked hard to oust a corrupt and racist government.

Khairy tried to change it from within since he was in that corrupt and racist government. Okay, fine! It’s hard to paint Khairy as not being an opportunist. But we have to face the fact that he was a big change in Umno.

It would seem that now, the voice of change has been suppressed. Think about it. We have a prime minister who used to be the prime minister 15 years ago under that the previous corrupt and racist government.

The supposed “prime minister-in-waiting” is the former deputy prime minister who served under the current (er, former) prime minister. There is also the undignified issue of MPs from the previous corrupt and racist government jumping ship and being accepted into the new coalition government.

What has happened to that change that we were hoping for? It’s like we changed but not really. Khairy tried to topple the leaders in his own party and is still very vocal about it. Rafizi tried to challenge his own party leadership. Nurul has resigned from all her party posts.

So the news of these three individuals coming together and having lunch is very interesting indeed. I don’t know what it is but I’m sure it means more than just a hike in egg prices or photo filters. Let’s just wait and see what developments ensue.

We welcome Indrani Kopal to our panel of judges for THE FATBIDIN.COM'S COVID-19 MINI DOCS FILM COMPETITION! . We have much respect for @indranikopal ever since watching her first short documentary which was screened at the Cannes Film Festival many years ago! So proud to have her judging our competition! So you better submit and see what she thinks of your story! . Fat Bidin Media is calling for entries for THE FATBIDIN.COM'S COVID-19 MINI DOCS FILM COMPETITION! . Stuck at home? Under lockdown? On the frontlines? It doesn't matter where you are or what you do, we want to know your COVID-19 story! So enter our documentary film competition and stand a chance to win RM1,000 cash and a collection of Fat Bidin books! Your film may even stand the chance to be aired and hosted on BERNAMA’s platform. Deadline for submission is 31st May 2020. . Visit https://fatbidin.com/covid19-competition for more details! Link in bio. . #FatBidin #FatBidinCovid19DocuFilmCompetition #Covid19 #Covid19Malaysia #Coronavirus #MovementControlOrder #ConditionalMovementControlOrder #CMCO #MCO #PKP #PKPB
Wahhh!! Thanks for the support @insyirahishkandar! Kita ada peminat yang sama lah YB @maszlee!! Muahaha!! By the way, you haven’t signed my copy of that particular book yet. When are we catching up YB? #LiberalMalayAndMalaysian @gerakbudaya
I hereby declare #HariRaya over! This ‘Raya sebulan’ thing is just overrated! Back to work and to all your Zoom meetings mafakas! #CovEid #SelamatHariRaya #Aidilfitri2020 #TheBustAzlees #TheBustAzleeMafakas #TheAzlees #Bromance #Covid19 #Covid19Malaysia #Coronavirus #ConditionalRaya #RayaBersyarat #CMCO #PKPB
It seems that the government is now too conveniently falling back on the pandemic and the conditional MCO to get out of anything that could threaten their position (such as democracy!). . Go read my column at Malaysiakini.com or at FATBIDIN.COM. Also, link in the bio.
Ditch the kids and off for a date night! Happy belated everything to my everything! #GonnaGetLuckyTonight #Bromance #FuckingFilmmaking #TheBustAzlees #MediumRare #Steak #Beef #CMCO #PKPB #Covid19 #Covid19Malaysia #Coronavirus #SocialDistancing #NewNormal #KebiasaanBaharu #BeritaBusters
So, did the #Covid19 pandemic produce more creative #HariRaya ads or is it the opposite? #Aidilfitri #HariRayAds #Covid19Malaysia #Coronavirus #MCO #CMCO #PKP #PKPB . Watch #TheFatBidinFilmClub’s full review at FATBIDIN.COM or YOUTUBE.COM/FATBIDIN. You can also find the link in the bio.
A new episode of #BeritaBusters is dropping tomorrow (Friday, 22nd May)! Here's a teaser to wet your lips just a little bit! We talk about how #Ramadhan, #HariRaya and praying (for all religions!) is going to be like in the time of the #Covid19 #pandemic! Jeng jeng jeng! BERITA BUSTERS Berita Busters adalah rancangan berita dan hal ehwal semasa yang bertujuan memberi maklumat pada orang ramai tentang Covid19 dan Coronavirus. Setiap minggu, hos Zan Azlee dan @sherilabustaman akan berbincang dengan wartawan-wartawan yang sedang membuat liputan di lapangan tentang isu dan berita terkini. Berita Busters is a weekly news and current affairs programme that aims to inform and educate the public about Covid19 and the Coronavirus. Every week, hosts Zan Azlee and Sheril A. Bustaman, discuss the latest news and happenings with correspondents who are covering the issues on the ground, hands on. Episod baru setiap Jumaat! New episode out every Friday! #BeritaBusters #ThisInFact #HumourOverRumour #HumorOverRumor #NewNormal #KebiasaanBaharu #MovementControlOrder #ConditionalMovementControlOrder #PerintahKawalanPergerakan #PerintahKawalanPergerakanBersyarat #MCO #CMCO #PKP #PKPB #FatBidin #Faktademic #VERIfied #Pasti #BeritaBusters #FactNotFake #Factdemic #FaktaBukanAuta #NewsBusters #CoronaChaos #PasarFakta
We were supposed to go back to sleep after sahur because we worked late last night. But somehow, mysteriously, the two smaller mafakas appeared in our bed! 😖😖 #TheBustAzlees #TheBustAzleeMafakas 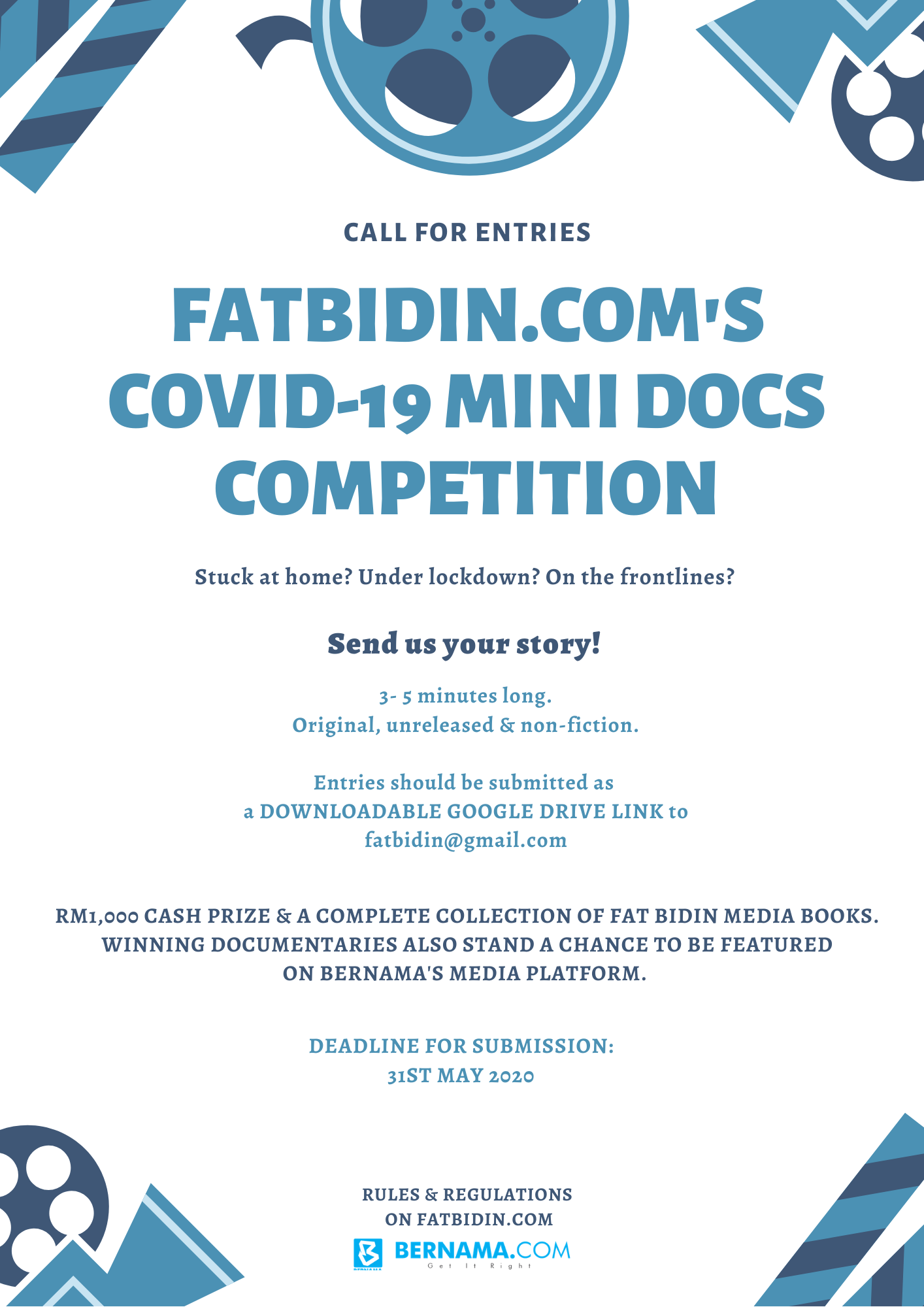 BERITA BUSTERS (EP 2) – PUASA YANGYOK! / FASTING UNDER LOCKDOWN!
Berita Busters is a weekly news and current affairs programme that aims to inform and educate the public about Covid19 and the Coronavirus. Every week, hosts Zan Azlee and Sheril A. Bustaman, discuss the latest news and happenings with correspondents who are covering the issues on the ground, hands on.
This week’s issues:
1. Raya time! Eh, cannot lah!
2. Err.. how to translate?
3. Kuih in exchange for personal data!
Journalists: Ian Johan Ariff (Astro AWANI), Hadi Azmi (BENAR News), Daniel Anthony (Malaysiakini)

The Fat Bidin Film Club Ep 206 – Covid19 Hari Raya Ads!
Did the pandemic produce more creative Hari Raya ads or is it the opposite?

BERITA BUSTERS (EP 2) – PUASA YANGYOK! / FASTING UNDER LOCKDOWN!
Berita Busters is a weekly news and current affairs programme that aims to inform and educate the public about Covid19 and the Coronavirus. Every week, hosts Zan Azlee and Sheril A. Bustaman, discuss the latest news and happenings with correspondents who are covering the issues on the ground, hands on.
This week’s issues:
1. Raya time! Eh, cannot lah!
2. Err.. how to translate?
3. Kuih in exchange for personal data!
Journalists: Ian Johan Ariff (Astro AWANI), Hadi Azmi (BENAR News), Daniel Anthony (Malaysiakini)

The Fat Bidin Film Club Ep 206 – Covid19 Hari Raya Ads!
Did the pandemic produce more creative Hari Raya ads or is it the opposite?