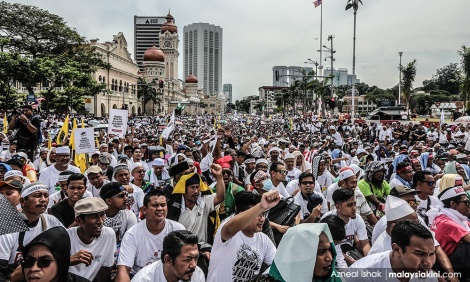 Proof that Malaysia is split down the middle
By Zan Azlee

I’ll be honest and say that I did not expect the turnout at the anti-Icerd rally to be as huge as it was. I was making my assumptions based on all the other gatherings that have been happening throughout the past seven months since Pakatan Harapan won the government.

These gatherings, such as the ones at the courthouse whenever an Umno leader (ie: its former president Najib Abdul Razak or current president Ahmad Zahid Hamidi) is brought to be charged, have been very small.

Then, lo and behold, the reports started coming in on that fateful Saturday and it would seem that the number of people who turned up could rival any of the previous Bersih rallies. The streets of Kuala Lumpur were filled with people in white.

The only difference was the demographics of the rally-goers. If the Bersih rallies of yore consisted of people of various races and beliefs, this one was very homogeneous. It was mainly the Malay Muslims who attended the Dec 8 rally.

But then again, that shouldn’t be a surprise actually. The general election results last May already showed that the nation is almost equally divided. Pakatan Harapan had won but at that point, it was merely just a simple majority – which is fast turning into a bigger majority thanks to all the party-hopping, but let’s save that topic for another day.

Based on the election results, it is clear that Malaysians are almost split in the middle in what they want for the country. There is one half (which won) who want change. These people believe in diversity, transparency and equal rights (for the most parts anyway).

And then there is the other half who want the status quo (ie: the BN government to continue). They do not see the huge corruption scandals as a problem and neither do they see the racist and oppressive behaviour as an issue.

Take a close look at the Dec 8 rally and notice that the calls from the rally-goers were that they do not want Malaysia to ratify the International Convention on the Elimination of All Forms of Racial Discrimination (Icerd) because they want to retain the special privileges for the Malays as well as preserve the Malay race and the religion of Islam.

Where on earth did they get the idea that signing a human rights treaty would actually mean that the Malay race and Islam would be wiped out? In fact, ratifying Icerd would mean that Malays and Muslims would actually be treated as any other human being.

And it would further be an assurance that the Malays and Muslims would not be discriminated against or oppressed, and neither would anyone else from any race or religion. It would mean that everyone would be treated equally and fairly.

That isn’t so bad, is it now? Unless, of course, these Malays and Muslims are afraid that they will no longer be special or be treated better than the rest. Oh, wait a minute! That’s probably it.

In any case, I think that the rally was a good thing in the sense that it proves the importance of freedom to assemble and free speech. By coming out and expressing their feelings, they have given the other half of Malaysia some fodder to think about.

It definitely has given me something to think about. Now, I see these people as innocent Malaysians who have been manipulated and taught to fear human rights and fear change that is progressive for society.

We are all too familiar with how the leaders of the Opposition (former government) took on the role of fear-mongers. Their tactic of divide and conquer was basically a way to keep the people ignorant so they can continue to maintain power.

This is where we need to realise that half the country is actually very scared. They don’t really understand what is happening and this is all due to the manipulation of a very few irresponsible so-called leaders.

I am pro-Icerd but I do not want to dismiss or ridicule those who are anti-Icerd. It is our responsibility to engage with them and convince them that they have been manipulated and taken advantage of. Tell them that they are no less or no more Malaysian than the rest of us.

However, I will dismiss and ridicule the irresponsible so-called leaders who have been doing the manipulation and fear-mongering. It is great that we voted them out of the government. Now, we have to make sure of their extinction from politics totally. We need to be purged off their poison.