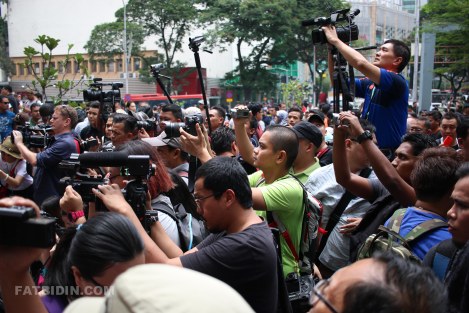 I was reading with much interest the latest installment of R Nadeswaran’s column in Malaysiakini titled ‘Providing fair and accurate news in New Malaysia’. In it, he conveyed his argument that there should be freedom of the media no matter who makes up the government.

He elaborates that many people have been adamant that BN, who are now the Opposition, should not be given so much time and space in the media because of the decades of authoritarian rule they had imposed on the country.

In fact, Nades even relates several instances where he has seen articles that were favourable to BN appearing in the media, then after a short while, would ‘disappear’. He is worried that censorship has re-emerged in the media landscape.

He is worried that editors are once again making the call on what we can or cannot be exposed to, and mostly this just happens to be things that are detrimental or negative to the current government. His question is – is the apple-polishing culture coming back again?

Unlike the previous BN government, the current government has not made any demands on the media on what they should or should not report. The previous government used to even stop journalists from specific news organisations from attending official press conferences.

I have to agree with Nades and I have seen it happen too. I have seen news organisations that were utterly pro-BN when the coalition was in government but, internally, they complained that they couldn’t give the other side enough coverage due to ‘circumstances’.

But now, when Pakatan Harapan is the government, they suck up so much by giving them the same kind of coverage they used to give to the then BN government that they totally forget about giving equal coverage towards the new opposition. And that isn’t so fair now, is it?

There are also journalists who were never pushing the boundaries during the previous government, but now, are suddenly so vocal and opinionated they think themselves as brave. Please! It doesn’t count as bravery when the risks are not longer that high. But that is a rant for another day.

However, to be honest, I couldn’t give two sens to news organisations who try to align themselves with whichever party they want to. I am not naive to think that objectivity exists in journalism, nor do I believe that it is essential or compulsory either. We are all human, anyway.

There are so many things that influence subjectivity in journalism, from the context of an individual reporter who has individual opinions, to the larger context of media ownership or societal pressure. What is more important is that journalism and the media stay honest.

If there is true freedom of the media and freedom of speech, then news organisations owned by elements from BN should be allowed to report the news from their perspective, and vice versa without restriction (as long as there are no lies, hate speech or defamation). Am I right?

The only requirements that I believe needs to exists is that there needs to be a wider choice of platforms from where we can get the news, and everything should be transparent so that we know the exact context from where that news is coming from, in order for us to make the most informed decision.

Of course, then there is the argument that maybe political parties or governments should not be allowed to own the media. But then my counter argument to that is freedom of the media and speech should guarantee that anyone should be able to own or have access to a public platform to voice their opinions.

Even the imbecile red shirts leader Jamal Md Yunos should be able to have his fifteen minutes of attention to say what he wants to say. It should be our decision whether we want to pay attention to what he says or not.

And yes, media organisations need to have the choice to whether they want to allow him on their platform or not too. Hence, this is where diversity of the media comes in. There needs to be a media organisation that would give Jamal Md Yunos the attention (but sometimes, an imbecile can be such a general imbecile that this could be difficult).

But this diversity in the media would also require a smart and intelligent public who is able to process the news they get, to accept it or not, criticise it and take the action that they think is the most appropriate based on that information. It goes hand in hand where both parties need to mature and progress.

With all the changes that have been rapidly taking place in Malaysia, we all have to step up and make sure that the choices we have made for the country are the right ones. Before, a discussion like this would not even be given serious consideration.

100 days or not, this truly is Malaysia Baru.