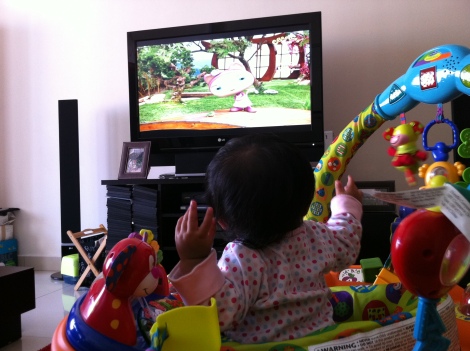 I love CBeebies! I really really do!

AUG 26 — Ever since the arrival of little Athena, the television at home has been dominated by baby and children’s programmes. And one of our favourites is BBC’s CBeebies. It’s a blessing when you just need some quiet time and you can plonk the little pooper in front of the television for 20 minutes.

My wife and I find it way better than the Disney Channel since it doesn’t mind numb kids into wanting to be princesses or buy expensive toys. But that discussion will be for another week. So we were watching CBeebies one afternoon together with Athena and I noticed how the BBC tried very much to be inclusive of all the communities in Britain.

They had TV presenters who were of all colours, from white to black, and even brown. It was very inclusive indeed. The kids who came on were of different cultures too. From very pale looking, blonde Scottish girls to brown and tanned, hair-in-a-bun Punjabi boys!

And the best thing is that none of the programmes that featured this multiracial cast ever made any reference to race and ethnicity. Everything just went on as usual as if all these races really existed and interacted with each other on a natural level in the country (which, of course, they do!).

Now that’s exactly what I want Athena to learn – to recognise that there are many different cultures and ethnicities around us, and not make a big deal out of it. [Click here to read the full article at The Malaysian Insider]

We were invited to the premiere screening of #MatKilau last week (thanks @zhafvlog!) and it was the first time we were surrounded by so many tanjaks and tengkoloks ever in our lives!! Mak aigh!! The Semangat Melayu was so thick in the air that even the great N95 mask couldn’t stop you from breathing it in!
When I go into the supermarket to buy groceries, my wallet is at a certain weight. After leaving, it becomes so much lighter! It doesn’t even matter that no physical cash leaves the wallet because I usually just wave my debit card. But… I guess the soul of the wallet has been sucked dry! Thanks Malaysian economy!!!
Good game, good laughs, good company and good teh ais! What more can you ask for mafakas? #FridayNightLights #Basketball #BBallManiax
Adrian Teh comes out with another film. Very prolific director! But, is this psychological thriller any better than his previous films? #TheAssistant
I will be hosting a live Q&A session on @mubimy’s Instagram with @jasmine_suraya tonight, 24 June 2022, at 9pm. She started her film career acting in @edmundyeo’s film River of Exploding Durians back in 2014. I’m excited! So come lah watch and join in the chit chat!
Aung San Suu Kyi has been put into solitary confinement at an undisclosed location and her trial will be moved from the courthouse to the prison. If found guilty of all the charges, she could face 150 years in prison.
All these years and I’m still trying to find and meet this group in our society that is always so confused.
Wait what? There was an NBA finals that went on? We were just enjoying our #FridayNightLights as usual! Hahaha! #Basketball #BBallManiax