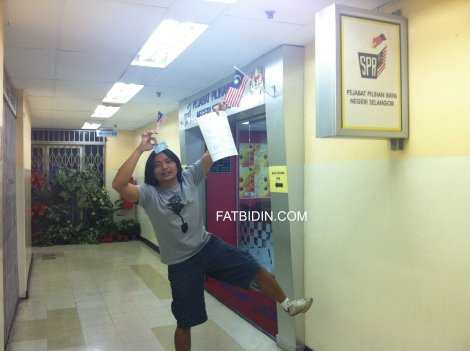 WITH Malaysia’s upcoming general election, some are exercising their democratic rights by calling for the electorate to place donkey votes.

The #UndiRosak (spoilt vote) movement is being led by youth activists dissatisfied with the two competing political coalitions – the ruling Barisan Nasional and opposition Pakatan Harapan.

When it comes to the ruling party, many feel like the corruption, cronyism and the old faces who have created the broken system are not fit to govern the country and need to go. This is despite the fact that they are the ones who came into power during independence in 1957 and have ruled ever since.

As for the opposition, the fact that now they have several former senior members who had come from the ruling party doesn’t give them much confidence. The fact that former Barisan Nasional prime minister Mahathir Mohamed has now been named the prime ministerial candidate if they win is actually the main gripe.

So, the activists who are propagating the #UndiRosak movement want the people to show their protest and anger towards how there is no proper choice for them to even vote. In theory, this is a great idea because the number of spoilt votes will illustrate number of people who are obviously dissatisfied voters.

However, I believe that this only works in a mature democracy where there already is a culture of a strong opposition or even a culture where the government has changed hands several times.

In Malaysia, the #UndiRosak movement is likely to fail. We just need the most number of voters to go out on the day and vote. The best thing we can do now is to either never the margin and provide a strong opposition, or even totally change the government. By spoiling votes, it just means that there will be less votes to help achieve this.

Several of the characters who are leading the #UndiRosak movement are actually people who I know personally. They are intelligent and respectful people who have ideas and thoughts that I value. As much as I don’t agree with their objective, I still feel that they have a right to say it.

At the very least, these people who have started the #UndiRosak movement have also started and encouraged much needed intellectual dialogue and discourse when it comes to democracy and politics in Malaysia. Now, Malaysians are actually discussing something worthwhile and this is exactly what is needed to help our society mature.

These people have been attacked and insulted with comments that have nothing to do with the argument and are more personal in nature. The women have been sexually harassed and insulted. The men have had their close relatives harassed. And you wonder why I say that Malaysia still doesn’t have a mature enough democracy.

In any case, the real objective is to have the politicians from both divides think about why such a movement has come about in the first place. Take heed that the people have concerns and if they are really interested in serving the people rather than their own race for power, maybe they will listen.

[This article was originally written for and published at AsianCorrespondent.com]
Get Zan Azlee’s latest book ‘JOURNO-DAD: The chronicles of a journalist who just happens to be a dad!‘ today!

I keep telling everyone younger than me that it’s very important they vote because the youth will live much longer and so they have more at stake! The older folks are all going to die soon so who do you think will have the future of the country as a priority?? Muahaha!!! #Undi18
After an almost two year delay due to the pandemic, #TheFatBidinCVECampaign is now in it’s final leg! A national tour (aka #OrangOreTour) of the three feature documentaries that we produced with three young directors! First screening tour session is prominent #Sabahan artist @haroldegn’s film #DariLaut which tells the story of Sabahans from all walk of life coming together during the #LahadDatu #Tanduo incident.
They say the eldest male offspring will challenge the alpha male in order to lead the pack. But I didn’t think it would be when he is only three years old! Watch your back mafaka! I can still break your face if I wanted to! Happy birthday Achilles! #TheBustAzlees #TheBustAzleeMafakas
Could #AbangLongFadil3 be #TheFatBidinFilmClub’s favourite movie of the year? Could it be? Really? Wow!
Al Fatihah for the late great Malaysian poet Wong Phui Nam. Conversations with him were always inspirational. I will always remember how he once agreed with me that we should all really just write in Manglish.
Camera malfunction (or operator malfunction and forgot to charge batteries). #Basketball #BBallManiax #FridayNightLights
Five directors direct five different stories of frontliners in Malaysia during the height of the Covid-19 pandemic. Yet another frontliner tribute movie. #Juang #JuangTheMovie
I hosted the opening ceremony of the 2022 #SeaShortsFilmFestival last night! It’s the festival’s 6th year now and is probably the best place to catch great films from around Southeast Asia. It’s happening at @mmumalaysia in Cyberjaya from 21st to 25th September. So head on down to @seashortsfilmfest! Thanks @basicallygohleekwang @jacky_yeap92 @tanchuimui for getting me involved despite my tight schedule.