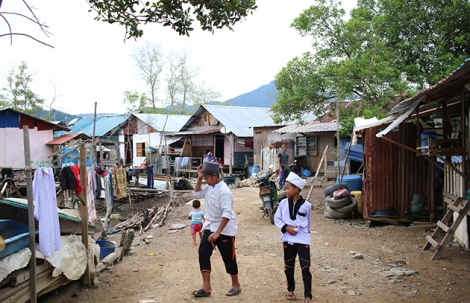 Looks like refugees have become the flavour of the week. Everyone is talking about them and they all have their opinions. Of course, there’s nothing wrong with that. The topic is trending and I am more than happy to discuss refugees and migrants because I, too, have my opinions.

Malaysia says that they support the Rohingya cause, as evident in Wisma Putra’s summoning the Myanmar ambassador to voice their displeasure on how Yangon is handling the Rohingya issue and the escalating violence in the Rakhine state.

There was also last year’s rally in a stadium where even the Prime Minister Najib Razak made an appearance along with several of his cabinet members. And they made really rousing speeches condemning the Myanmar government.

Here’s the deal. The Malaysian government can talk all they want about this but with no real action, nothing is going to happen. Foreign Minister Anifah Aman even said that he has lost confidence in Asean because little has been done on the matter.

He says Malaysia will continue voicing out their concerns anyway on other platforms such as the United Nations and Organisation of Islamic Countries (OIC). But again, it’s just talk but no real action.

In fact, this may even just be the Malaysian government playing on political rhetoric. Just because the general election is around the corner, many accuse our leaders of taking advantage of the Rohingya issue to further their political mileage.

I would like to make a few humble suggestions for some action to be taken. Number one, how about just taking the simple step of signing the 1951 Refugee Convention and accept refugees into the country and treat them well? That would definitely show that we are sincere in helping the Rohingya. For now, they’re all just considered illegal immigrants.

That brings me to my other suggested step, which is to just open up borders. Yeah, a drastic move! But this is something that I would like to suggest to all countries, not just Malaysia. Before you criticise and mock this idea, do hear the reasonings that I have for it.

Governments like Malaysia and its people, although very vocal about their support of the Rohingya, have always given all kinds of reasons as to why accepting refugees and migrants into the country is a bad idea.

Firstly, they always use the economy as a reason. If we accept refugees and migrants, then the influx would mean fewer jobs available and this would increase the unemployment rate of the locals. This is the ‘they’re taking our jobs away from us!’ argument.

What they fail to consider is that economists have long time ago showed evidence that when outsiders arrive in a country and obtain jobs, it actually increases spending and tax paying, which is good for the host country. Also, competition for jobs increase which means that a general improvement in skills among employees.

Yes, these foreign workers would most probably also be sending money back to their families in their home countries. But this would be considered a win-win situation. They spend here and they help their country back home as well. I see that as a good trade-off.

Another reason that is usually given is that migrants and refugee communities in a society will usually be the nest of all social ills. They are often the ones blamed for every petty or even serious crimes. They are also blamed for corrupting local culture.

This is just plain racist and xenophobic. The only reason why crime and theft would happen among these communities is if the host country sees them as illegal immigrants who are not given the right to work or get an education. They have no other option.

So that’s why open borders need to be a global practice. Open migration should be a basic human right because people need to be able to search for the best environment to survive and thrive. Sure, it is radical and won’t be something that governments are going to say yes to immediately. But think about it. It actually makes sense.

One response to “Malaysia should ink Refugee Convention to help Rohingya”