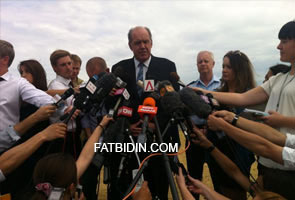 Here’s how to spot fake news
By Zan Azlee

This week, Communications and Multimedia Minister Salleh Said Keruak launched a new website called Sebenarnya.my. It aims to help the public determine whether a certain piece of “news” being circulated online is fake or true.

A collaboration between the ministry and the Malaysian Communication and Multimedia Commission (MCMC), the website attempts to provide verification and confirmation on trending news stories in cyberspace.

Head to the website and you will notice that it has a series of articles. Each article highlights one particular fake news.

Take for example, a Facebook posting claiming that a certain brand of paracetamol is actually made from tissue paper. Sebenarnya.my states that the Health Ministry denied ever discovering any such ‘tissue-paper’ paracetamol in the market. And that’s it. It’s a listing of fake news with a sentence or paragraph explaining why this is so.

Here is another example of a fake news that the website helped debunk. Social media was rife at one point with a story about a woman being swallowed by a python in Kulim, Kedah. The acting district police chief said they did not receive such a report.

I’m sure that it being a government-linked website, Sebenarnya.my makes the attempt to verify such news and information with the relevant authorities. But it just seems too arbitrary a process to warrant a website to be formed and managed by a government ministry and agency.

And the website itself seems so bare-bones that it looks like it is being managed by a single individual who has nothing better to do other than to scour the Internet for obvious fake news and debunking it.

Anyway, there already exists legit news organisations with professional journalists on their teams that report, highlight and verify news that are important, significant and newsworthy enough to be published.

Four things to do

It is not very difficult to actually tell that news like these are fake. Let me as a journalist give you some tips and advice on how to spot a fake news story:

1. If you sense that a story is a little bit dodgy, check the actual source of the story. Is it from a website that you have never heard before? And if it is, then go to a legitimate and credible news site and see if they are reporting about it too. If not, then it’s probably fake.

2. Check the URL of the story. If the URL seems more like an encrypted message, then it’s probably fake. URLs of credible sites are usually more recognisable and will most probably contain a .com or .org extension.

3. Observe the house style of the article. Is it written properly and structured well? Does it have typos and grammatical errors? Does it have a consistent style? All these are indicators of credibility.

4. And just use common sense! Would you really wholeheartedly believe a story that claims that a full-grown woman was actually swallowed by a wild python and not have any doubts that this could be fake?

But like it or not, a lot of people tend to be very gullible when it comes to news and information being spread online, be it on social media platforms such as Facebook, Twitter and blogs, or even apps like WhatsApp and Telegram.

It’s quite surprising to think that a society like Malaysia, where many people have grown sceptical and distrustful of the news media, can be so gullible in what they see and read online.

Or it could be just that – Malaysians are cynical of news media. So much so that they would just latch on and believe any news that is from an alternative source, even those they have never heard of before.

If that were the case, when people have become so desperate that they start throwing common sense out the window, then our society would be in a really sad situation. And when that happens, you will start seeing certain parties seeking to take advantage of it.

But of course, I’m not saying that Sebenarnya.my is trying to take advantage of any situation. How could it? The minister was reported to have specifically said the website was not being launched for the next general election, and that the purpose of it is to serve Malaysians, and not the government.

It’s either @riazurrahman is genuinely a nice guy or he just has really good PR skills. I still haven’t decided! Hahaha!! Good to meet in real life again after so long just seeing you on a computer screen buddy! #BloodyCovid
“I’m still da man, mafakas!” - Achilles Bustaman Azlee 😂😂
“I’m da man, mafakas!” - Achilles Bustaman Azlee 😂😂
What the hell just happened?? 😂😂😂 #Basketball #BBallManiax #FridayNightLights
I don't know about all of you, but at the moment, I can’t even differentiate the coalitions that exist in our Parliament. How ahh like that??
Yesterday was a day of multiple live TV crosses for @trtworld about former Malaysian Prime Minister #NajibRazak’s appeal against his 12 year prison term and RM210 million fine conviction in relations to the #1MDB corruption scandal. #Journalism #Journalist #JournaDad #FatBidin #TRTWorld
What can be done to eliminate race-based politics? Nothing systemic really because these parties should have the right to exist as well in a democracy. So how?
Wedding anniversary week over and all I did was enjoy the ride!