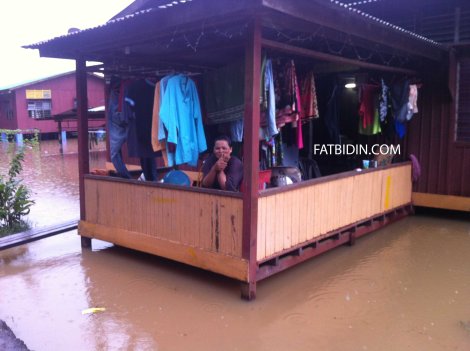 The flood season is in full swing and we know this because the media goes on hyper drive covering stories about the flood, and rightfully so. The hardest hit states are usually Kelantan, Terengganu, Johor and Sabah. But this doesn’t mean that other states aren’t affected too.

The nation’s leaders have been making the obligatory visits to the flood-affected areas. This provides for really good photo opportunities of these leaders on rescue boats and visiting evacuees and victims.

Okay, I apologise. That was a cheap shot but I couldn’t help myself. It is good that the nation’s leaders visit those affected. But that is not the issue that I would like to focus on in this article. It is something else.

More importantly, the authorities have started preparing all the rescue operations. Evacuations are happening in the worst hit places and to date, we have seen almost 23,000 evacuees being brought to shelters. They are doing a good job.

In fact, they are doing an excellent job. They have all the equipment in place and the training that they have received is top notch. They know all the hotspots to head to first and they are on top of things.

Even the non-governmental organisations (NGOs) are well-prepared every year. They have identified all the evacuation centres across the nation and very efficiently predicted the number of victims that are affected in order to provide the necessary aid.

The experience the authorities and the NGOs have over the years have helped immensely. And this is the specific issue that I want to focus on in this article. The fact that the rescuers and the NGOs have so much past knowledge and data to prepare for the annual floods is of concern.

One would think that after the many decades of floods, we would be experts not just in the rescue and humanitarian aid department, but also in the flood prevention department.

One would think that by now, the authorities would have at least some decent preventive actions that are put in place in order to reduce the number of floods and the severity of them from happening. This would prevent houses being destroyed and deaths.

Malaysia has the technology and funds to achieve some of the greatest urban feats – from transportation to architecture and construction. We have one of the world’s tallest buildings in our capital city and we have one of the smartest tunnels as well.

We have cross-country highways that are smooth and long. So much so that other countries around the world even look at our highway system as a benchmark for them to emulate and try to achieve as well.

Heck, recently, the country even started operations of the latest public transportation system in the form of the Mass Rapid Transit (MRT) that actually cost billions. It is currently the Klang Valley’s pride and joy.

And although we can’t stop what happens naturally, I’m sure we can at least try to improve on and prevent everything that is man-made that causes the flood. For example, having a proper drainage system, stop developing land irresponsibly as well as indiscriminate logging or just building homes at the right places.

One thing that should not be done is to politicise natural disaster. It seems that year after year, the different state governments and federal government continue to shift the blame around, limit or divert funds for flood avoidance and mitigation and whatever else.

The Natural Disaster Relief Committee, which was set up in 1974, has been doing a good job in providing more efficiency when it comes to relief efforts when the floods happen. This is definitely one of the main reasons why relief efforts are always successful.

What the country needs is a good and long-term flood mitigation effort that involves all the parties involved, from the state governments to the federal government and even the individual communities where the floods happen on a regular basis.

Deepening and widening of rivers could be done. A more managed water drainage system could be put in place, such as building flood preventing dams and levees. Land development needs to be controlled.

And definitely, we need to look at relocating residential areas that are flood prone. Instead of having these areas as residential areas, maybe build parks and reserves that will help in absorbing the impact of floods.

The country should stop spending billions in rescue and rebuilding efforts every time flood season comes around. Instead, we should channel the funds and efforts more concisely towards prevention. Isn’t it true they say that prevention is better than cure?