IF THERE is ever any need to prove that ignorance isn’t bliss but can actually be quite dangerous, then Malaysia’s “Red Shirts” group led by Jamal Yunos, a member of ruling party Umno (United Malays National Organization), is definitely the perfect case study.

The group that purports to be a defender of Malay rights and unity, and the counter-movement to Bersih 2.0 (the pro-democracy group fighting for clean and fair elections), has in recent months proven to be the epitome of racism, the kind of racism Malaysia’s growing middle ground has been fighting hard to eradicate.

They’ve organised numerous rallies and demonstrations with a mixed bag of objectives, from accusing foreign powers of trying to infiltrate the country and topple the government, to trying to push and uphold Malay supremacist ideals.

The most recent was the gathering they organised last Saturday to counter Bersih 5, whose objectives were five-fold: clean and fair elections; clean government; the right to dissent; strengthen parliamentary democracy; and empower Sabah and Sarawak.

In the days preceding the gathering, Red Shirts leader Jamal (very) loudly declared “war”on Bersih 2.0 and promised that his followers would come out in droves to wipe out the pro-democracy group’s yellow-shirted demonstrators. He accused Bersih 2.0 of being funded by foreign powers and claimed they were planning to topple the government via unconstitutional means.

More than once, Jamal warned that he may not be able to control his followers, who he described as “hungry”. The threat, although veiled, seemed very much like a warning to Bersih 2.0’s supporters.

And so on the eve of the Saturday rally, the police launched a massive crackdown, detaining all the main leaders of both the “Red Shirts” movement and Bersih 2.0. Among those arrested were Bersih 2.0 chairwoman Maria Chin Abdullah, and yes, Jamal as well.

When morning arrived, it was evident that without Jamal and the rest of his right hand men, the “Red Shirts” participants were like headless chickens. All the major meeting points where they were told to gather were nearly empty, with only a handful of supporters milling about almost aimlessly. 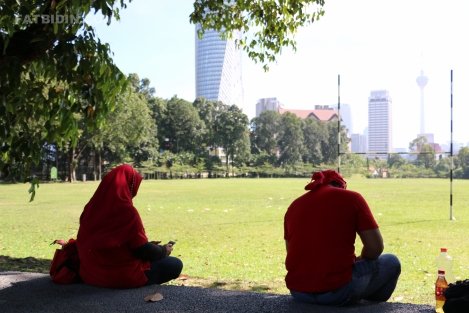 But that didn’t mean the group was totally silenced. Their supporters, after making contact with one another at several random places, marched onward to their main destination – Padang Merbok.

And it was during this march that the “Red Shirts” bared their true colours.

The police were admirably meticulous in making sure the reds and yellows would have no opportunity to clash. They were understandably worried that something untoward would happen. Protesters from both sides met with police-manned barricades and detours all over the place. 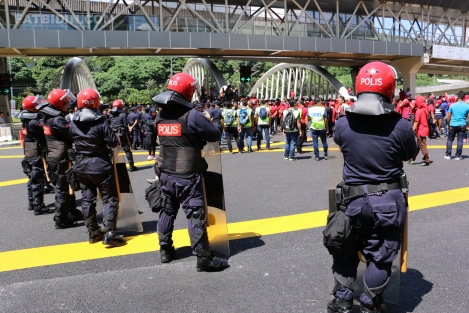 During one of the detours along the Tuanku Abdul Rahman road, a group of about 200 “Red Shirts” participants spotted a group men wearing Bersih 2.0’s signature yellow T-shirts. What resulted was plenty of screaming from protesters, with the red team even resorting to flinging a bottle at one man in yellow.

This, naturally, invited more shouts. And then one red-shirted protester carrying a flag on a bamboo pole charged towards the men in yellow. He was followed by a boisterous crowd of red but fortunately, some of the marshals from the “Red Shirts” group managed to persuade the group to continue on their march.

Little did they realise, however, that when the police granted them passage to Padang Merbok earlier, it was part of a strategy to cordon them off and keep them under control there, away from the yellow shirts. Some people gave very short speeches and eventually, the 1,000 or so “Red Shirt” protesters started to get bored and slowly dispersed.

It was interesting to see what actually motivated people to support the objectives of the “Red Shirts”. Logically and rationally speaking, it would seem incomprehensible for anyone to be in support of such blatant racism.

But many did not seem to think so.

“The Chinese need to respect the Malays so the Malays will love them. The non-Muslims need to respect Islam so we can take care of them,” says Zawawi Othman, Umno chief for Pasir Puteh, a district and parliamentary constituency in the east coast state of Kelantan.

“Remember, you are only a guest in my country. Don’t make me lose my patience,” he adds.

Norazimah Sanur, or more affectionately known as Mak Tam, said that she was against Bersih 2.0 because it has Jewish influence.

She also claimed that many of the ethnic Chinese supporting the pro-reforms group aren’t even from Malaysia.

“I watch the news and the news says that Bersih is being sponsored by the Jews. Why would the news lie? We don’t want the Jews to take control,” she says.

“Do you think the Chinese in Bersih are from Malaysia? They are outsiders. Ask them where they live and they won’t tell you. There are Malays in their midst too, but these Malays don’t know how to think,” she explains. 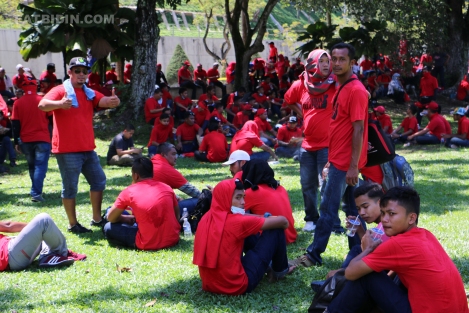 All that this proves is that ignorance can be dangerous.

But fighting them is definitely not the way.

The best strategy is to continue creating awareness and to educate. Once society is well-informed and ignorance ceases to exist, the irresponsible and the evil will cease to exist too.

[The article and pictures were originally published at AsianCorrespondent.com]