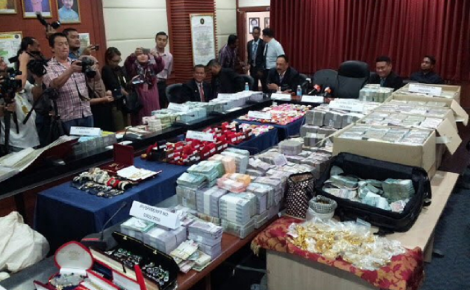 Is Southeast Asia really a cesspool of corruption?
By Zan Azlee

LAST week, an unimaginable amount of cash was found hidden in the offices and houses of two government employees in the state of Sabah, Malaysia. A total of RM52 million (US$12.5 million) to be exact. Another RM60 million was found in their bank accounts.

These two individuals, who are supposed to be serving the people, work for the Sabah Water Department and the money is apparently kickbacks linked to RM3.3 billion (US$800 million) worth of federal infrastructure projects in the north Borneo state.

Allow me to stress that a bit more. The Malaysian Anti Corruption Commission (MACC) raided the offices and homes of these two government servants and found, literally, stacks and stacks of cold hard cash stashed in closets, cabinets and cupboards worth RM52 million. You read that right!

Yeah sure. These two people are innocent until proven guilty. But this is just a perfect example of how corruption is so much a part of life in the country. And this case only involves some low ranking officials. What kind of perception does this give of those even higher up the chain?

In Malaysia, the term ‘duit kopi’ (coffee money) is understood by all – it means small-time bribery. And people just laugh when they hear about it. But that is the problem. The fact that they can laugh almost indifferently shows that the people have really become desensitized to it all.

To think about it, it’s not just in Malaysia (the 1MDB scandal doesn’t help either) but the entire region is seen as functioning via corruption. It’s sad to see that big blanket stereotype being thrown by the rest of the world at this region. But can you really blame them for thinking this?

Today, ask any Filipino and they will tell you that if you want to get involved in politics in that country, you will definitely need to learn the Padrino system. It is so ingrained in the system that it is just accepted as standard practice.

The Padrino system is an unofficial patronage system in Filipino politics that plays on nepotism and cronyism. It is said that if you want to get ahead in politics there, then you have to play the game. And you can see how corruption can fester.