I also wrote a text article on Captain Shaha for My Malaysia! 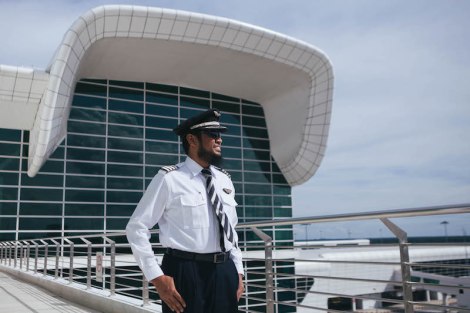 The next time you’re on an AirAsia flight, be sure to check if your pilot is the famous Captain Shaha, the poet pilot of the skies.

Taking a flight is not always the most pleasant thing for many people. You have to arrive at the airport a few hours earlier in order to be able to catch your flight. You queue to drop your luggage. Then you endure the dreaded security line and, don’t forget, immigration.

You can almost be certain of being in a grumpy mood once you board the aircraft. The thought of being cooped up in a small space for several hours can only further sour your disposition. But then you hear a soothing voice over the aircraft’s PA system.

“Assalamualaikum and a very good evening to everyone. My name is Captain Shaha and I will be flying your aircraft today along with the First Officer and the rest of the flight crew.”

Captain Shahirul Alim Aminudin, or Captain Shaha as he is affectionately known, then recites poetry and jokes. His voice is comforting, jovial and friendly. It definitely beats the stereotypical pilot droning that nobody understands, informing the passengers of who-knows-what.

[Click to read the full article at My Malaysia]

When you’re just too fast for the defence to catch! 😎😎 #FastBreak #EasyBasket #Basketball #BBallManiax #FridayNightLights
Personally, I feel that the pros of keeping schools open more than outweigh the cons. #MCO #PKP #Covid19
Ramadan #basketball session + sahur! #BBallManiax #FridayNightLights
The prolific #MamatKhalid returns with another tale from #KampongPisang! #18PuasaDiKampongPisang #18Puasa #KampongPisang @khalidmamat @astroshaw
Buka puasa with this bunch of IG stalkers and then a round of #JustDance on the #Nintendo!! #TheBustAzlees #TheBustAzleeMafakas #YoungArif #FatBidinHQ
@sherilabustaman meets different Malaysians who are doing their best to be kind and she implores everyone to do the same!
We need more people to condemn the practice of 'period spot checking'. Government authorities, religious authorities, everyone and anyone should express condemnation regarding the issue. Let it be loud and clear that Malaysians do not stand for things like this happening to our children.
#Ramadan #basketball session!! #BBallManiax #FridayNightLights