I was having lunch with some friends from the United States embassy in Kuala Lumpur last Wednesday and later that afternoon, one of them posted on Facebook that ‘The shit has hit the fan!’.

I initially thought he was in trouble for having an extended lunch with me. But several hours after that, I knew what he meant. And the whole world knew too.

The US’ Department of Justice (DOJ) held a press conference to announce that they were filing a civil suit to seize all the assets in the US related to the 1MDB controversy.

Worth US$1 billion, the US Attorney-General said that it was obtained through the use of the Malaysian people’s money through dirty means and it should be returned to them.

And of course, there was the drama of a certain individual in the DOJ document that was identified as ‘Malaysian Official 1’. No need to be a genius to figure out who he is through the detailed description.

It was the evening of 20th July 2016 when the DOJ held the press conference. It was carried live by most of the major international news organisations like CNN, Al Jazeera and the BBC.

Later on, all the major international newspapers carried it too, with most of giving the story front page treatment. Some even outrightly named prime minister Datuk Seri Najib Razak.

I was excited because the 1MDB controversy had run out of steam here in Malaysia, seeing that the Malaysian Attorney-General Tan Sri Mohamed Apandi Ali had cleared the prime minister of any wrongdoings.

I waited to see how the Malaysian news media would cover the issue locally. So, between 20th and 21st July, I observed and monitored as many local news organisations as I could.

It was amusing to see that a majority of the news organisations in Malaysia just ignored the DOJ’s press conference and didn’t even mentioned it in any of their news reports both days.

The New Straits Times did not have any reports on the DOJ’s announcement at all. But the next day, the paper reported on all the responses given by by local parties. 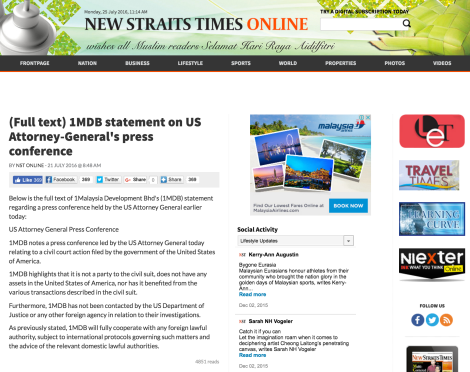 Of course they had other responses by Cabinet ministers like Datuk Seri Dr. Salleh Said Keruak as well.

Aside from the same type of responses like the NST, The Star had a report saying that the Malaysian Attorney-General is stressing that no misappropriation of 1MDB funds took place. 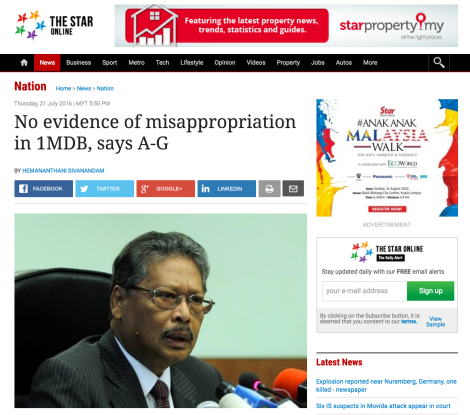 Malay newspaper Berita Harian had much of the same, but in Bahasa Malaysia, of course. So no surprise there.

And so followed suit the ultra-Malay Utusan. And they also had a report whereby Apandi said that there was no mention of Najib in the suit filed by the DOJ. 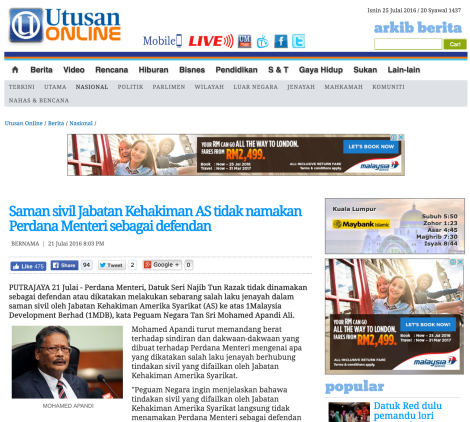 Astro AWANI as well, did not carry a single report on the DOJ press conference. They didn’t publish it on the website, and neither did they have it on television.

They had, just like the other local news organisations, the usual Malaysian government’s responses, including one report of Kedah’s Umno Youth Chief, Datuk Shaiful Hazizy Zainol Abidin, saying there is a conspiracy challenging the sovereignty of the country. 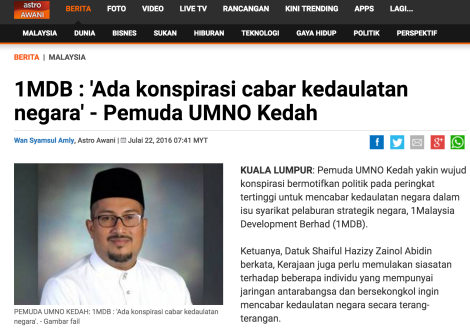 And speaking of television, RTM and the Media Prima channels like TV3 did not run far from how the above-mentioned news organisations reported on the issue as well.

There were a few local Malaysian news organisations that reported on the DOJ announcement as is and also had a more critical position against the Malaysian government and the 1MDB controversy.

Malaysiakini is the probably the most obvious news site to enter most people’s minds. The Malay Mail Online also did so.

As for the print media, The Edge ran the headline ‘Wolf of Wall Street sued as US seeks 1MDB-tied assets’. Do remember that they were suspended for three months by the government for running critical stories against 1MDB last year.

And so there you have it. A general observation of how most of the Malaysian news media reported on the developments of the 1MDB controversy last week.

It is important to note that I have always had the opinion that the news media can be biased because true objectivity doesn’t exist anyway. As long as they are honest, then it’s okay.