Will the Malaysian Book of Records validate the largest kleptocracy case in history?
By Zan Azlee

So after a lull in the controversy that is the 1MDB case, it is now back in the spotlight. But spotlight of the world, that is, since it’s big news everywhere except Malaysia.

Before we go on, a little bit of a backgrounder. The United States’ Department of Justice has filed a civil suit to seize assets worth US$1 billion that is related to the 1MDB fraud case.

In the suit, they name several individuals, such Riza Aziz (Prime Minister Datuk Seri Najib Razak’s stepson), Jho Low, and others who are not named but definitely easily identifiable.

For example, one individual is called 1MDB OFFICER 1 and in the description, the person is ‘a Malaysian national who served as the Executive Director of 1MDB from the time of its creation until approximately March 2011’.

And then of course, the main character called MALAYSIAN OFFICIAL 1. I’ll make it a little bit fun for you. Here’s the link to the civil suit document. See if you can find his description and guess who he is.

In this BBC news article titled ‘1MDB: Malaysian PM under pressure over $1bn US fraud case’, outright states ‘Mr Najib is not named in the US papers and has consistently denied wrongdoing. But he is identifiable as “Malaysian Official 1”, whose account allegedly received millions in funds originating from 1MDB’.

Now back to the first paragraph where I mentioned that this issue is now big news everywhere except Malaysia. Why I say that, you may ask.

Just check out all the headlines in the local news media. Do you see any of the mainstream media outlets reporting on the Department of Justice’s actions?

Yes or no? Well, I find it really interesting in how the local news media is covering the issue. And I am working on an article about it which I will publish it on my website this Monday.

Now all kinds of reaction can be seen in Malaysia. Cabinet ministers like Datuk Seri Dr. Sallleh Said Keruak have said that Najib is innocent.

One Umno member, Kedah’s youth chief Datuk Shaiful Hazizy Zainol Abidin, says that there is a politically-motivated conspiracy to challenge the sovereignty of Malaysia.

And he even likens it to how the United States government, at one time, conspired to accuse Iraq and Saddam Hussein of having weapons of mass-destruction.

Hmm… but then former US President George W. Bush never played golf with Saddam Hussein in Hawaii, did he?

Najib himself had to make a reply, although it was a low-key one. He posted on his official website saying that people should not jump to conclusions and make any speculation.

He also stresses that the Department of Justice filed a civil suit and not a criminal one. I guess that makes a lot of a difference.

Riza Aziz’ sister, Azrene Ahmad, posted on Instagram responding to her brother being named in the the Department of Justice’s civil suit.

That is an interesting one. It seems to imply certain ‘opportunities’ that were presented to her and her brother at one point. But who can be sure what she’s really talking about. 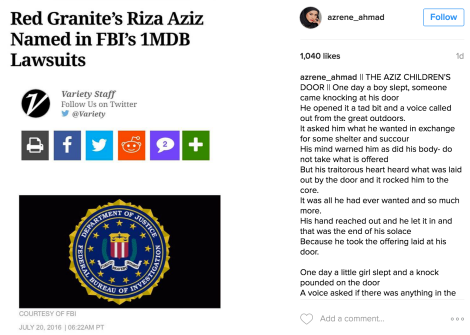 Former prime minister and the BERSIH committee held a press conference that was not carried or covered by any mainstream media calling for Najib to stepdown. It was on Facebook Live.

But the most interesting is the reaction by the Malaysian public. I don’t have to write much about that. Just go on your social media platforms and search for the hashtag #MalaysianOfficial1. Or read this article ‘1MDB scandal: Will the real Malaysian Official 1 please stand up?‘.

I’m just glad that the issue is back on the mouths of the people. Any form of corruption should never be forgotten.

And since as Malaysians, we have always been obsessed with breaking records, how does holding the record for being involved in the largest kleptocracy case in history feel?