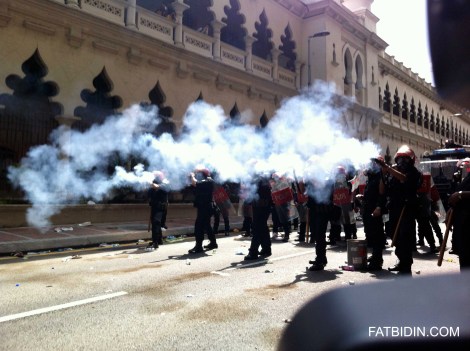 The Malays shouldn’t be a violent bunch
By Zan Azlee

I don’t want to generalise, but there is this perception that Malays are a group of people who seem to be inclined to violence.

I am a Malay too because my father is one and it says so on my birth certificate, even though on my maternal side, I’m Chinese.

I don’t mean to criticise the ethnic group that I belong to. But I need to call out and say something is wrong when I see it. I take it as my responsibility (so self-righteous!).

And who else better to criticise the Malays if not a Malay himself (although technically, a half-breed!)? If anyone else from another ethnic group does so, he would be called a racist.

Now that I’m done with the disclaimers, let’s refocus on the point I am trying to make.

On Tuesday, a coalition of Malay NGOs led by one Datuk Jamal Md Yunos dressed up in red and started beating themselves up in front of the Sogo shopping centre in Kuala Lumpur.

It was a sight to be seen! Men were hitting each other with pieces of wood and smashing heavy roof tiles on their heads and backs to show how strong and tough they are.

It was like a big kungfu demonstration by Shaolin monks to show off their strength and mental abilities. Alamak! Wait a minute! Shaolin monks aren’t Malay!

The group’s leader reportedly stated that they are anti-Bersih, referring to the Bersih 4.0 rally this weekend.

The reason for the violent display of strength is to show that they will be ready to ‘defend’ themselves if any ‘problems’ were to arise between them and Bersih 4.0 participants.

I find it absolutely funny how this group of Malay NGOs can quickly jump to the assumption that problems would equate to violence. What would be their reasoning?

Bersih is led by a middle-aged woman and it’s icons are an old lady who walks around holding flowers (aka Aunty Bersih), and an elderly man who likes to write poetry (Pak Samad).

And this makes me wonder who is leading in the game of positive perception here? The saying goes, ‘fight fire with fire’. Not fight elderly people with pieces wood and huge roof tiles!

This is just one example of why I can’t help but entertain the thought that Malays are inclined to violence. Remember the Low Yat incident? The first people to arrive were Malay thugs.

And whenever Malay politicians talk about fighting and preserving Malay rights, they always seem to choose a weapon (the keris) to wave around for maximum effect.

As a member of the Malay community, I would like to say “Come on lah wei!”. What is wrong with you people? Can’t you learn to be more dignified and refined?

One response to “The Malays shouldn’t be a violent bunch”