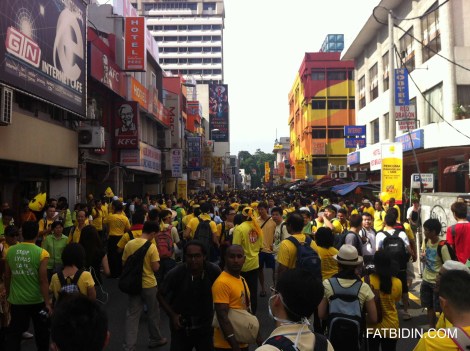 Firechat away during Bersih 4
By Zan Azlee

I am all for people power because I believe that those who are in authoritative positions would naturally already have more power than an ordinary citizen.

Like that quote by Haruki Murakami: “If there is hard, high wall and an egg that breaks against it, no matter how right the wall or how wrong the egg, I will stand on the side of the egg.”

So, anything that empowers the people will have my support. Be it a proper democratic government system, or even tools such as crowdsourcing platforms and social media.

I have attended as a citizen and covered as a journalist, all the rallies organised by Bersih from the first one in 2011, and hopefully, the fourth one this Merdeka weekend.
One of the key challenges for participants and journalists covering to ensure that they can all operate smoothly and safely is good and clear communication.

A crowd that can grow into the tens of thousands can get overwhelming for the organisers to control, and difficult for the people to feel calm and relaxed.

Keeping in constant contact with others becomes difficult because of the huge number of people who attend using smartphones which clog up the phone reception.

Also, from my observations, there will be vehicles stationed around the area with big antennae and dishes that, I can only assume, are signal jammers.

That’s why I got excited when I started hearing about Firechat, a chatting app for smartphones that allow users to communicate with each other even without Internet connection.

How it works is that it can seamlessly change its mode of communication from the Internet to Bluetooth or even local WiFi connections without interruption.

So even if you lose Internet, as long as you have your Bluetooth or WiFi function on, you will still be in communication. But, the people you talk to need to be in your group of followers.

Technically, your range will start increasing as long as more people continue to join the network, from different but connecting geographical locations.

This is pretty cool, and if you study the credentials of this app, you will learn that it was used successfully by the participants of the 2014 Hong Kong sit-in protest.

Although it is a good tool to allow people to stay in touch in situations where communication is difficult, one must still be cautious about the information.

Firechat allows users to also communicate and spread information anonymously if they choose to. And that could be a problem – the issue of credible and legit information. As is with all social media platforms, as much as it empowers people and allows them to organise themselves, it is still open to abuse and manipulation.

[This article originally appeared at The Malaysian Insider]

The Malaysian Court of Appeal has dismissed #NajibRazak’s appeal against his conviction for corruption. However, they have granted a stay of execution pending an appeal to the Federal Court. #1MDB
Educating #TheBustAzleeMafakas about the best nature broadcaster ever! Rest in peace #CrocodileHunter #SteveIrwin #AlFatihah #GorgeousSheila #BeautifulColourisation #Crikey
My daily running photos… back by popular demand! Boom mafakas!
We review an oldie but goldie! #Sepet can be viewed on one the newest streaming platforms, @kinidiamedia, out there for free right now! #YasminAhmad
Biniku @sherilabustaman cas poet!! Hahaha!! But I do think it’s quite good! So go order now! Then put on a beret and snap your fingers mafakas! Heheh!!
They say basketball never stops. But it does for us… when the ankles and knees scream out “Hokay!! That’s it for the week!”. 😂😂😂 #Basketball #BBallManiax #FridayNightLights
Most Malaysians are no longer fooled by these politicians who are trying to gain political mileage out of nothing but being ridiculous.