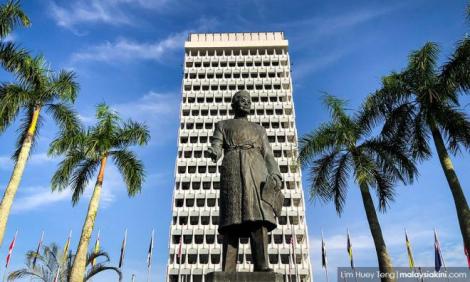 I was a bit irritated when, during the last parliamentary session, the older MPs were asking the younger MPs to sit down and dismissing their questions and comments by saying things like “cucu atok” (grandchild) and “YB baru umur empat tahun, saya dah jadi ahli parlimen di Segambut (You were only four years old when I was already an MP of Segambut).”

Okay, we don’t need to be all sterile here. Let’s just mention the individuals involved. Muar MP Syed Saddiq Syed Abdul Rahman was heckled by Umno MPs, including Jelebu MP Jalaluddin Alias who asked Syed Saddiq to shut up and sit down, and also called him “cucu atok”.

Federal Territories Minister Annuar Musa harped on and on about having been an MP and living in Kuala Lumpur before Segambut MP Hannah Yeoh and Lembah Pantai MP Fahmi Fadzil were even born (even though his facts about the two MPs were laden with presumption mistakes!).

What I find funny is the fact that these younger MPs that the older ones are making fun of for being young are actually in their late 30s to early 40s (albeit Syed Saddiq who is 27, but I’ll get to that later). What does that make the older MPs? Dinosaurs?

We currently have a prime minister who is also in his 70s and from the last check that I did, the average age of MPs in Malaysia is 55.5 years old. We’re being led by a bunch of ageing dinosaurs!

Okay, let’s be fair. We shouldn’t be ageist because age shouldn’t matter if a leader has his or her feet on the ground, understands the people and thinks rationally and compassionately. You can be 27 or 95 and still be a good leader.

Unfortunately, the bulk of our boomer leaders don’t seem to have these characteristics that I mentioned. Take the Umno MPs who heckled Syed Saddiq for example. Sure, he’s young and a first time MP. Some form of ragging is needed as a right of passage.

But what happened was distasteful and showed ignorance because what they did was focus on his age and nothing to do with whatever he said or was going to say in parliament. Syed Saddiq showed class by ignoring them and continued with his address.

With that, we move on to the argument of needing a more diverse representation in the government and this includes age diversity. That’s why I think Syed Saddiq’s move to start a youth party is very important for the progress of our country.

Policies that are developed and put in place for a country, for the most parts, is to move the country forward towards progression. And when we talk about that, who else is it going to affect the most if not the younger generation.

So who better to be crafting out how the country is going to be in the future if not the younger generation who will be living in that future? These are the people who would have the most at stake if compared to a 60, 70 or 90-year-old.

So, we should be empowering our youth to take the country into their hands. I applaud the fact that the voting age has been lowered to 18 years. In that same bill that was approved, the minimum age to contest as an MP was also lowered to 18. Alhamdulillah!

This is an empowering move for the youth who should now realise that they have real responsibilities. I strongly believe that this will lead our youth (who are generally seen as apathetic to social concerns) to be more socially and politically active.

And the rest of Malaysia, including the boomers, also have a responsibility to provide an environment that will help to educate and create awareness to the youth of this responsibility. Only then will we have a society that will continue to thrive as the generations move forward.

What shouldn’t be happening is where old boomers continue to think that they know best by making decisions that are only in the interest of themselves. This is extremely selfish with no foresight in preserving the country for future generations.

For example, the decision to not repeal the University and University Colleges Act (UUCA) is one of those self-serving and selfish actions. You have a voter group that is young but you also have an act that would prevent them from being politically active. What is that all about?

It seems like the perfect way to create and maintain a society that is uneducated, unaware and apathetic. Now, who would gain in a situation like this? Definitely not the society and definitely not the country. From what I can see, only the old boomers gain here.

As I’ve said previously, let’s be fair. Not all the old boomers in parliament are selfish. I’m sure there is a handful of those who recognise this and want to do something about it. Unfortunately, they are all being drowned out by the immature heckling and jeering.

So, to the youth of Malaysia, keep fighting. Malaysia is your country and will be yours for much longer in the future than it will be for the old boomers. Do not fall into the trap of being a leader of tomorrow. Strive to be a leader of today to ensure you have a better tomorrow.