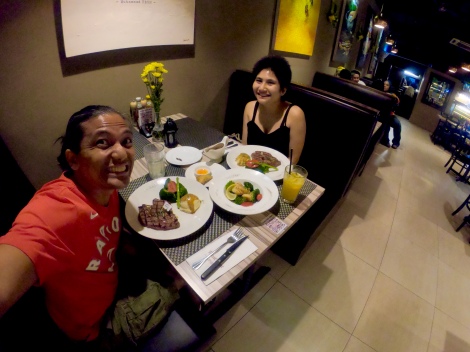 I have had cabin fever from the very first day when the movement control order (MCO) began on March 18. The night before it was to take effect, my wife and I drove to Bangsar and had dollops of rice with fried squid and mutton varuval (spicy, dry-fried) on banana leaves because we didn’t know when we would be able to go out and eat again.

True enough, we wouldn’t get the chance to eat at a restaurant for the next two months. Although we did order for delivery many times, it just isn’t the same. Eating out is an experience. You hear the noise. You see people around you. You interact with the establishment. You pick food that is right in front of you. You get fresh air. You are just out.

So when the conditional MCO was declared and restaurants started opening up for dine-in customers, my wife took the opportunity to ditch the kids and go out for food. We have been out several times now and for the most parts, we have noticed the establishments and the people we meet do practice proper social distancing.

My wife and I are quite vigilant. We’ve got three kids at home. So we carry around our individual bottles of sanitiser and bring along face masks. But we don’t want to be too paranoid because that will just ruin our lives. There will always be diseases out there. This year alone, dengue has claimed 81 lives in Malaysia. That isn’t far off from the 116 Covid-19 deaths.

But sometimes, it can be difficult to fight other people’s paranoia. For example, my wife has sinus problems and sometimes, she sneezes. She doesn’t have Covid-19 but people still give her dirty looks. As for me, I am quite active and have a high metabolism. So I move around a lot and sweat too (my wife says I’m like a hyperactive five-year-old boy with ADD – attention deficit order).

And because of that, when I reach a restaurant or the supermarket, sometimes my body temperature reading can be a bit high. The reaction from people can be borderline offensive. But I usually calm them down by saying that they just need to let me rest for a few minutes after walking from the car park to get my body temperature back to normal.

This brings me to an article I recently read in The Independent. It caught my attention because the headline stated: “Couples should have sex wearing a mask to reduce risk of transmitting coronavirus”. Hey! I’m a hyperactive guy with a high metabolism. Of course, a headline that has that three-letter word is going to catch my attention.

The article was about a group of researchers from Harvard University who published a study they did in the journal Annals of Internal Medicine on how to have safe sex during the Covid-19 pandemic. One of the suggestions that captured everyone’s attention was that people should wear masks while having sex with one another.

So let’s go through the list of suggestions these researchers have made to keep you safe from Covid-19 and still have sex. We shall begin from the safest to the riskiest.

Okay, this is the lowest risk of all. Just don’t have sex. But, I have to admit that this is not an option for me. Stuck at home in lockdown and not being allowed to have sex? Aiyo!

I would still consider this abstinence since you’re aren’t really interacting physically with another person. So I’m striking this out as an option too.

4. Having sex with people in your household

Aha! This is something more feasible. I do have a consummated marriage with my wife. So I’ll go with this (but “people” will just have to be “person”). But then again, this is the irony when I have to sit far from her at a restaurant.

And the riskiest sexual activity of all, according to the Harvard researchers, is – having sex with people outside of your household. Sigh! I guess I’ll have to wait for the pandemic to be over before I can really start having fun! (Hahaha! I am just kidding!)

On a more serious note, the British government has actually come up with laws and rules when it comes to sex to prevent people from having sex with others outside of their household. It is the same thing in the US as well, to curb the spread of the virus.

At the end of the day, I wish I could convince people that it is okay to sit next to each other because we are husband and wife living in the same house, where we have been under lockdown all this while. It is quite ridiculous to think that I can kiss her goodnight at home but can’t sit next to her in public.

But I think I understand why people insist on enforcing this even if it isn’t rational or logical. They don’t trust their fellow Malaysians in actually following the rules of social distancing. That’s sad because the main reason for relaxing the guidelines and making it conditional is because we are supposed to trust each other to play our roles in curbing the disease.

“I feel the need! The need for speed! (Mafakas!)”
Oopss.. sorry! Terkena mata! #Basketball #BBallManiax #FridayNightLights
We were invited to the premiere screening of #MatKilau last week (thanks @zhafvlog!) and it was the first time we were surrounded by so many tanjaks and tengkoloks ever in our lives!! Mak aigh!! The Semangat Melayu was so thick in the air that even the great N95 mask couldn’t stop you from breathing it in!
When I go into the supermarket to buy groceries, my wallet is at a certain weight. After leaving, it becomes so much lighter! It doesn’t even matter that no physical cash leaves the wallet because I usually just wave my debit card. But… I guess the soul of the wallet has been sucked dry! Thanks Malaysian economy!!!
Good game, good laughs, good company and good teh ais! What more can you ask for mafakas? #FridayNightLights #Basketball #BBallManiax
Adrian Teh comes out with another film. Very prolific director! But, is this psychological thriller any better than his previous films? #TheAssistant
I will be hosting a live Q&A session on @mubimy’s Instagram with @jasmine_suraya tonight, 24 June 2022, at 9pm. She started her film career acting in @edmundyeo’s film River of Exploding Durians back in 2014. I’m excited! So come lah watch and join in the chit chat!
Aung San Suu Kyi has been put into solitary confinement at an undisclosed location and her trial will be moved from the courthouse to the prison. If found guilty of all the charges, she could face 150 years in prison.