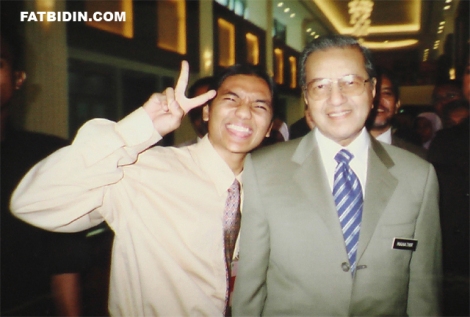 Who’s responsible for the Tanjung Piai loss?
By Zan Azlee

Recently, Prime Minister Dr Mahathir Mohamed stated that he is entertaining the thought of reshuffling his cabinet. Apparently, this is his reaction to the results of the Tanjung Piai by-election.

In case you forgot, Pakatan Harapan’s Karmaine Sardini (Bersatu) lost to Barisan Nasional’s Wee Jeck Seng (MCA) by more than 15,000 votes. This is the biggest margin any candidate has won in that constituency since 2004. Harapan had won that seat in the last general election.

Initially, Mahathir said that the results could be his fault but he “couldn’t know for sure”. This came after several Harapan MPs said that he needed to shoulder the blame for the loss. This would be similar to the time he called for Najib Razak’s resignation when Barisan Nasional won by a drastically reduced majority in the 2013 general election.

I guess it’s different when Mahathir is prime minister, huh? But then again, this is just a small by-election and not the national general election. Fine. That could just be an acceptable reason as to why he doesn’t need to resign. But the responsibility still needs to be accounted for.

It is obvious the voters want a change in the leadership, or at least, to what has been happening in the administration since Harapan took over the government. And the issue of a cabinet reshuffle was actually raised at a supreme council meeting after the by-election.

Mahathir admitted that people in the area also saw that the party is young and immature and yet to be organised in Tanjung Piai. He also mentioned that the reasons could be the cost of living, the economy and that the Harapan government could not disperse monetary assistance as easily as possible, as done by the previous government.

Wow! I would love to have that valuable skill of saying something that sounds like I am admitting to a mistake, yet what I am really doing is slamming the other party. Is that what witty wordsmiths and literary people call a double entendre? Well, I wouldn’t know. I’m not witty.

Mahathir also did say that a reshuffle might not be a good idea because Malaysia is hosting the Apec Summit in 2020. Instability and change could be a potential risk, especially so when a changed he or she is close to the summit period. He might have a point there. But then again, it is also a damn good excuse.

So Mahathir says that a cabinet reshuffle is not going to be today or tomorrow. Hmm… sounds exactly like what he said about handing over power to Anwar. He says that a transition of power will happen, but he can’t give a definite time because he needs to make sure the country is okay first.

The fact of the matter is that all these reasons have already been made known by the people and by the media. The Harapan government chose to ignore all of it and felt that the people would still have their backs. How wrong they were!

Unfortunately, this isn’t the Malaysia of old. This Malaysia now consists of people who know that they have the power to make a change and that means they are not going to take any nonsense from those they elected to power. So when people talk about Malaysia Baru, it may not mean a new government but a new people with a new realisation.

Actually, there is one glaring missing element in Mahathir’s admission of what the people are upset about. He totally forgot about how many Malaysians are tired of the racial and religious politics played by both his coalition and the opposition.

The thing about Mahathir is that he is a very charming, articulate and witty fellow. He knows how to address people with a speech that will leave them laughing and feeling warm. But it also leaves them with amnesia too. People will start to think that he has decided to take action and so they leave it with him.

But then he doesn’t really do anything about it. Case in point, I give you again what has happened with Anwar Ibrahim and the handover of power. Come to think of it, a reshuffling of the cabinet doesn’t just mean changing ministers, right? It can also mean the changing of the prime minister.

I wonder if anyone made that suggestion during the supreme council meeting?

One response to “Who’s responsible for the Tanjung Piai loss?”