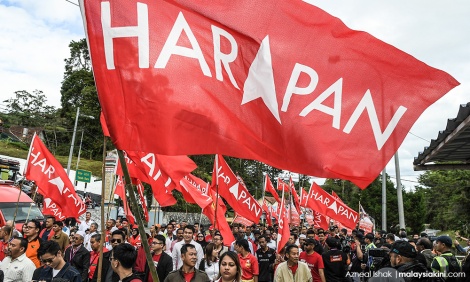 What does everybody think about the Pakatan Harapan government? I can bet my bottom ringgit that most people now are slowly losing the faith that they had in the not-so-new administration. Wait, let me check the Merdeka Center poll that has been talked about recently.

Oh, I was right! Their approval rating has dropped from 75 percent when they first won the election to 41 percent after a little over a year being in power. Wow! So much for election euphoria! I don’t care what you say but that is a drastic change of sentiments within a year.

I’m afraid that I may have gradually fallen in that 34 percent reduction category – very reluctantly I have to admit. This isn’t a very nice feeling seeing that there is no better option for the government right now because the opposition is just a bunch of racist and extremist fools.

When I talk about this, I have people saying to me things like, “so, you would actually prefer if Umno and PAS take over?”. But that isn’t the point. The point is that right now, we have voted in a coalition that isn’t fulfilling many of their promises and we need to hold them accountable.

It would seem that the only thing Harapan has been efficient at is bringing former corrupt leaders to justice. This action has even brought us global attention. That would definitely appease angry Malaysians who were tired of our money being siphoned away.

But 500 days on, Harapan can’t just bank on revenge as their winning point to stay on as the government. The biggest problem that I see they have is the fact that they are also playing the unscrupulous racial game just like the previous administration.

Umno and PAS, of course, are continuing with the game. They accuse Harapan of wanting to oppress the Malays and Muslims. This is easy because all they need to do is tell the Malays that Harapan has the DAP.

The argument is that since parties like Bersatu and PKR are in cahoots with DAD, and that one of their campaign promises have been about equality and fairness among all Malaysians, then the coalition can easily be made to look like they are anti-Malay and anti-Islam.

Of course, this is ridiculous logic but unfortunately, Umno and PAS seem to be able to manipulate the Malays into thinking along this line. This scares the Malays in Harapan, which in turn, makes them also want to play the racial game because they don’t want to lose the Malay vote. Same game, different day.

That’s one. And what about everything else? Has the economy improved and is our quality of life better now? To be honest, I don’t see a difference. Wages, unemployment and cost of living are still the same. Nothing has improved because the grouses of the people are still the same.

Education, although it has seen some refreshing changes in the form of holistic evaluation and civic education, still needs a lot of improvement. And let’s not forget the status quo when it comes to racial quotas for accessibility to schools and institutions. That is a big problem.

According to the Merdeka Center, Malaysians still want higher wages, more job and business opportunities, better education and, definitely, more equal opportunities. This seems like valid and legit demands of the people so Harapan needs to step up.

There are those who also say to me “the government needs time. At least some things have improved. The media is freer and you get to express more, right?”. Yeah, sure. I can criticise the government. Great! But I’ve been doing that, and so have many others, for the past 20 years even under the previous administration.

Granted, there have been improvements. There has been relatively increased transparency in government processes. And yes, I have to admit that the media landscape has changed for the better. But I still stand by the fact that this isn’t enough and too much time has gone by already.

We Malaysians have a right to feel this way because we have been waiting and fighting for a change for so long, and we were hyped up by Harapan with all their promises that it finally became the tipping point for change. So, now, we also have a right to demand those changes from them.

It’s been 500 days and now there are another 1,300 days left till the next general election. It feels like a blink of an eye and we are where we are now – dissatisfied with Harapan. Three blinks and that 1,300 days will come too. I still want to have faith in the change that I voted for. What say you, Harapan?

I had the pleasure to spend the last two nights moderating dialogue sessions for artist Gan Siong King (@yarimoriya) at his video exhibition titled ‘All The Time I Pray To Buddha, I Keep On Killing Mosquitoes’.
Friday night date with a blondie!
We finally watched J2: J Retribusi! Yippee ki yay mother fuckers! Best ke cerita ni? Let's find out! #J2 #JRetribusi
This morning, we realise it is the first time all three kids are out of the house for school at the same time! Like what Braveheart said… “FREEEEEEEEDOM!”.
My super-celeb and famous artist friend Gan Siong King is exhibiting his film/video project called 'All the Time I Pray to Buddha, I Keep on Killing Mosquitoes'.
I was on @bfmradio’s #ABitOfCulture with Kam Raslan and @kamil.othman1. We talked about online film criticism in Malaysia, common film tropes and the export of South Korean culture! Sexy stuff!!
In the case of the 19 year old boy getting punished by the members of the mosque for attempting to steal donation money, if anything, their actions would likely push the boy even further away from the mosque and the religion.
Brought Achilles and @sherilabustaman to visit Tok Wan this weekend! I quite miss her lah! Don’t worry Wan… you may not have met Sheril but you two are quite similar… always shouting at me the same thing… “Aiyoo Zan! When are you going to grow up ahh?”. 😂😂 Al-Fatihah Ang Swee Poh. Best grandmother ever mafakas!