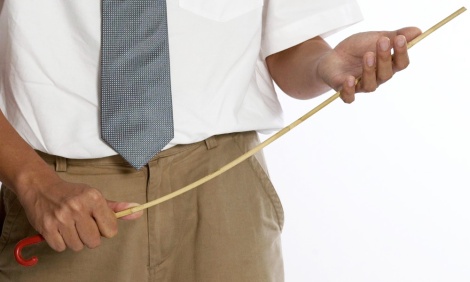 No corporal punishment in school or at home
By Zan Azlee

So we’ve got these two cases where teachers have resorted to violent corporal punishments when it came to disciplining students. The first case was in Johor while the second was in Pahang. Cases like these do crop up every once in a while and they become a topic of conversation.

Then, people who are around my age will come up to me and say, “What is wrong with these kids? All so spoilt! We used to be caned by our parents and we turned out okay, didn’t we?”. No buddy! I was never caned or hit by my parents. And I did turn out okay.

The point here is that to progress as a society, we need to make sure that all forms of corporal punishment like caning, smacking and slapping are stopped, whether it be in schools or even in homes. I am glad Minister Dr Maszlee Malik has made a statement saying that he opposes all forms of violent punishment.

Children today are not like children of yesteryear and adults today shouldn’t be like adults of yesteryear, either. The way I see it is that corporal punishment is a way to discipline children when adults are just too lazy to think of a better way to do it. So, what easier way than just beating the child into submission, right?

Unfortunately, when that happens, it just drills fear into the children. When they fear something, they will want to avoid it. But instead of avoiding the behaviour that causes him or her to be beaten, they find ways to just not get the beating. Hence, this could lead to him or her doing whatever they aren’t supposed to and either hiding it or lying about it.

Basically, it is more likely that children who are beaten as a form of discipline will not necessarily learn or understand that whatever they did to deserve the beating is wrong. They just don’t want to receive the beating.

There is a high chance that when these children grow up, they will want to continue doing what they were beaten for and just say to their parents or teachers, “I’m all grown up now and I’ll do whatever I want and you can’t do anything to stop me!.”

I am of the belief that it is more effective to talk and explain the reason to the children as to why certain things they do is wrong and should not be done. It may not have immediate result, and you might have to repeat that over and over again, but in the long run, it will pay off because as the children’s mind develops, they will learn.

They will then understand that they shouldn’t do something because it is wrong and not because there might be a beating waiting for them later on. This understanding would then be a permanent thing and they won’t be out there doing things they aren’t supposed to because no one is going to beat them at the end of the day.

I’ll be honest and say that the alternative to just beating a child isn’t easy. Well, it isn’t easy for the short term because it requires patience and consistency. And many times, talking alone won’t be very effective and it needs to be coupled with actions.

But what kind of punishments should be meted out that is physical? And when it is in the heat of the moment, when you catch your child doing something wrong, your patience can be a little bit short. Thinking clearly as an adult can be pretty challenging in situations like that!

But, as adults, we need to persevere. Like it or not, adults do know better than children. But do we know everything? Of course, not. We need to learn and experiment along the way, too. I’m lucky that in my journey raising my children, my wife Sheril and I share the same objectives. So we keep each other in check.

As for the two teachers from Johor and Pahang who resorted to corporal punishment, they need to be re-educated in their ways of disciplining students. One is already going to be sent for counselling. I hope the other will, too.

And you may notice that I make no mention of what it is the students did to deserve the punishment. In my opinion, that is immaterial because children will always have disciplinary problems. What is material is the way we choose to react and correct it. The future of the country depends on that – literally.