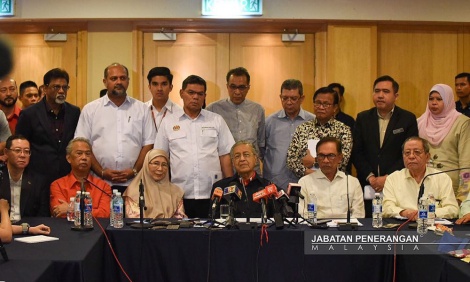 One case in point that got me upset is how lawyer Latheefa Koya was appointed as MACC head by Prime Minister Dr Mahathir Mohamad. The prime minister made a unilateral decision without any consultation with the cabinet or the Parliamentary Select Committee.

Mahathir gave his reasons for doing so and it was that he did not want to go through all the red tape involved with the appointment, so he made the appointment by himself. It may be true that the prime minister is accorded certain privileges in this sense but he goes against New Malaysia’s commitment towards transparency and democracy.

Personally, I think Latheefa would make a good candidate. She has always been vocal and critical of issues that were against democracy or not favouring the rakyat. She was a former member of PKR and she would even be very critical of her own party members. I have always seen her as one of the good guys.

But the reality stands: she was part of a political party and it is crucial that the position at the MACC is one that needs to be independent of any politics. It needs to be non-partisan and non-bias so as to give the rakyat the confidence that the MACC will do its jobs properly.

Well, talk about privilege! This has to be the epitome of it. I love wearing black pants. I pair it with T-shirts, shirts, baju Melayu and, basically, any kind of top. Nothing is going to stop me from wearing my black pants. I love the look and the flexibility of it. I currently have a few pairs in my cupboard, and heck, I think I’ll go buy more.

I can understand a royal tradition that needs to be upheld. But by saying that only the royal family holds the right to wear a particular clothing style or colour, that is taking it a bit too far. As Malaysians, we respect the royals. They are, after all, a pillar of our country, Federal Constitution and Rukunegara. But they are still just as human as any other Malaysian on the street.

Malaysians no longer want to live in a society where we are governed top-down by authoritarians, be it politicians or sultans or rajas. We do not live in archaic or feudal times anymore. The privilege to be a leader is exactly that – a privilege. It is not a right.

It is a privilege that is given by the rakyat. And for all of those leaders who are given the privilege, as much as the rakyat respects them and hence, giving them that privilege, they need to realise that the respect has to be reciprocated. A leader stands only as high as the people he or she leads allows him or her to stand.

The rakyat doesn’t really demand much. All they want is to be governed the way they have been promised to be governed. So for the leaders who have been chosen, just fulfil those promises that they themselves have made. It really just as simple as that. And, of course, act humble and be respectful.

Oh, by the way, the right Malay analogy to differentiate between different classes among members of society is ‘antara enggang dan pipit’ and not ‘antara helang dan pipit’. Do a quick Google search and you will see if it is true or not. I kid you not.

A friend of mine who is a Malay literary connoisseur and writer interpreted it aptly by saying that an ‘enggang’ (hornbill) is an elegant and peaceful bird which is always perched on the tree tops, while a ‘helang’ (eagle) is a vicious meat-eating predator that preys on the weak.

I literally just sat down to watch parliament in session at 5:15pm and they postpone it! Mafakas betul lah! 😂😂
Mak aigh!! What’s the lowdown in Parliament?? Listen to my MP @fahmifadzil.1’s TwitterSpaces! 😂😂
Astaga!! What’s happening in Parliament?? Let’s watch @maszlee’s Facebook Live stream going on now! 😂😂
I absolutely love watching @nba #basketball and no doubt it has the highest quality of play. But, watching the USA team that consists of 100% #NBA players losing at the international stage does make me smile because dragon-slaying stories always have a special place in my heart! Hahaha!! Ok ok... I know I know... it’s the #Olympics and there needs to be good sportsmanship. So let’s see if the #DreamTeam can bounce back. In the meantime... #VivaLaFrance! #Olympics2020 #Tokyo2020
I think the days of politicians giving the rakyat advice and telling us what to do, which is supposedly in our best interest, are gone.
Full on meta-humans now mafakas! Time to go on holidays, @weezer and @foofighters concerts, camping trips, play basketball... oh wait... Malaysia still on full lockdown. Ughh! #FullyVaccinated #CucukMyAz #VaksinCovid #FuckCovid #VaccinationDone #Vaccine #AstraZeneca #FatBidinGetsVaccinated #Bromance #Covid19 #CovidVaccine
#KesianCP3 #Not2021NBAChampion @suns @bucks #NBAFinals2021 #NBAFinals #CP3 @cp3
Damn! I can make a shot from anywhere mafakas! Muahahaha!