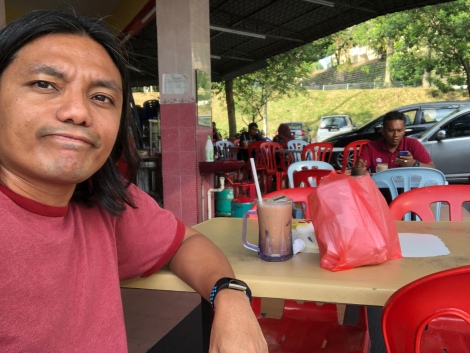 Finally, we get fresh air at the mamak!
By Zan Azlee

“The government is stupid! Don’t they know that by banning smoking at food outlets, they are ostracising a majority of the people?”

“The cigarette industry contributes so much to the nation financially. Jobs are available and taxes can be collected. What’s the problem?”

“If I want to smoke, then I’ll smoke. It’s not like I’m hurting anyone so the government should mind their own business.”

These are just some of the many general statements going around made by people who don’t agree with the smoking ban that the Health Ministry has announced, and has taken effect since the start of 2019.

Some smokers find this move so offensive that they want to fight the ban by just smoking and defying it. Some people even resort to slapping restaurant workers who tell them not to smoke. So gangster over just a stick of cigarette.

If they think they are such gangsters, why not just go on shooting heroin, smoke some meth or take syabu in the middle of the mamak restaurant and then stab the police who come to arrest and reprimand them? Gangster, my foot!

Last year, a public relations agency representing a tobacco company approached me and offered to pay me to write articles that would promote smoking. They even had one of their nice officers take me out for lunch at a fancy restaurant to persuade me.

Of course, they were trying to be smart by requesting me to write about how the government should be stricter in enforcing smuggling and contraband laws instead of asking me to outrightly encourage people to smoke. Obviously, I did not agree to do it.

If I may, I would like to say that I think that this ban is one of the best things to start the new year with. I am an anti-smoking advocate and, over the years, have written numerous articles in my column calling for more measures to curb the smoking culture.

Almost every year, the government increases the sin tax when it comes to tobacco and cigarettes. The price of those disgusting sticks have gone up ridiculously over the years and it can be quite a burden on the wallets of smokers.

However, smokers still persevere through and continue to spend their hard- earned money on killing themselves. Of course, they will stupidly justify it to themselves by saying that they are contributing to the nation’s economy.

The fact that smokers think that they are just hurting themselves by smoking and no one else, is ridiculous too. So many times, my wife, kids and I have to suffer through thick smoke at restaurants because the people at the next table are smoking.

The worst is when I see parents who smoke right in front of their children. Some even carry a baby in one arm with a cigarette in their mouth. These parents deserve to die and burn in hell. Even worse, I have heard of mothers who smoke during pregnancy. I have no words for them.

It’s a well-known fact that second-hand cigarette smoke is more dangerous than the smoke inhaled through a filtered cigarette by an actual smoker. In fact, my father has a family friend who was a smoker and his non-smoker wife died several years ago of lung cancer.

Let’s say a smoker doesn’t give anyone cancer and only ends up hurting himself. What happens when he gets cancer or some other disease? Who ends up with the burden of caring for him if not his loved ones like family and friends? Not very thoughtful of that, is he?

Statistics have shown that developing countries like Malaysia, Indonesia and the Philippines have some of the highest smoking rates in the world. In comparison, more developed countries like those in Western Europe have experienced a huge decline.

A chat with the previously mentioned PR officer enlightened me of the fact that one of the biggest cigarette factories in the world is in Indonesia. Why is it there? It’s because developed countries have laws that make it very difficult to set up cigarette factories.

Developed countries have long implemented holistic measures to make sure smoking is demonised. So if in the 1950s and 1960s, cigarette smoking was affiliated with sophistication and intellect, it is the total opposite now.

This isn’t the case in countries like Malaysia, where many people still see smoking as something cool and sophisticated. Some women even make it an argument for liberation. I have no problems with fighting for women liberation, but why use something that can kill you? Liberation = death?

So finally, with a ban like this, the country is moving a little bit faster in the right direction. All the hike in the sin tax and also in failed awareness efforts like the hugely uninspiring ‘Tak Nak’ campaign won’t do much without a more holistic approach.

A combination of a high sin tax, more effective awareness campaigns and drastic bans like the one that has just been implemented will hopefully work. In fact, we should quickly work towards an outright ban and criminalisation of cigarette smoking altogether.

Now, I am going to enjoy going to mamak even more because of the fresh air that I can finally enjoy with my teh ais kurang manis and roti canai kosong garing with a little bit of dhal and sugar.

If you see anyone defying the ban, please do us all a favour by reporting it to the Health Ministry. Call their hotline at 03-8892 4530 or send a WhatsApp message to 010-860 8949. If all these smokers can do is bitch slap a waiter, then they’re not really that gangster!

For decades, #ASEAN has been an organisation that never interfered in the affairs of its member nations. But now, it is taking a tough stand on Myanmar and are refusing to allow the country’s military junta leader from attending it’s upcoming summit.
It's @tanchuimui’s first feature film in ten years and it's going to be in the cinemas soon! We emceed the premiere VIP screening and reviewed it too! Muahaha!! #BarbarianInvasion @dahuangpictures
Late night supper discussion. Jokka jokka bola eh… katanya. #Bugis
Another satisfying night of slam dunking, swooshing and steamboating mafakas! #BBallManiax #BasketBall #FridayNightLights
The movie #Frontliner on #Netflix is apparently a tribute to all frontliners. But err.. we dunno lah... how ahh? Jeez!
I believe that MPs, ministers, and basically any elected official or leader that holds a position of authority needs to be compensated fairly, and in fact, handsomely. These are my reasons.
Our first venture back to the cinema world after such a long lockdown was a special screening of @tanchuimui’s latest film #BarbarianInvasion! And I emceed the Q&A session too!
Happy 44th birthday sweetheart (@arifrafhan)! 24 years and counting… we’ve been together for more than half our lives now! 😘😘 #FatBidinHeartSuperdoofus