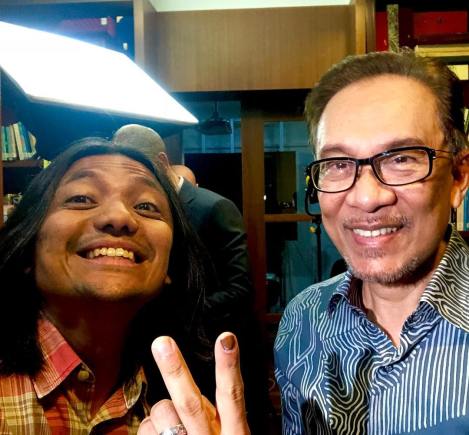 It may not be illegal for Danyal Balagopal Abdullah to resign and vacate his seat as the MP for Port Dickson for party leader Anwar Ibrahim to contest in the by-election, but it is highly unethical. Sure, we know that the senior leadership of PKR had made the decision, but what about the people of that constituency? Were they asked about the decision?

Isn’t this the exact issue that everybody raises whenever an MP switches parties after an election so that the defeated party gets to form the government? Remember what happened in the state of Perak during GE12? Several Pakatan Rakyat assemblymen changed sides, and BN managed to form the state government.

Everyone made so much noise, especially Pakatan Rakyat, and they even argued that the actions of elected representatives to change parties after being elected into office be made illegal because the people did not vote for such a change. It is the same case when an elected official resigns and forsakes his constituents.

So yes, there are many people who are now crying foul that Anwar and PKR have decided to instruct Danyal to ‘sacrifice’ and vacate his seat. Danyal, of course, does not admit that he was instructed to so. He says that he will stay on to assist the constituents and not forsake the people who had voted for him.

In fact, according to a news report, Danyal even said that Anwar was reluctant and he had to convince him that this was a right move and that he would remain in Port Dickson to be Anwar’s eyes and ears on the ground. Yeah, sure. Like everyone is going to believe that wholeheartedly without taking a pinch of salt.

PKR’s secretary-general, Saifuddin Nasution, also came out and said that Danyal received no compensation for vacating his seat since it is not something that is common practice in the party. Danyal is just very committed to bringing Anwar back into Parliament and clearing the path for him to be the next prime minister.

However, we cannot act surprised at what had transpired. It has always been made clear, even before the general elections and before Anwar was released, that he was going to be the next prime minister after Dr Mahathir Mohamad. Even Mahathir has said that he would make way for Anwar when the time comes.

Not the first time

Anyway, Anwar has done this many times before. In 2008, Dr Wan Azizah Wan Ismail vacated her seat for Anwar to contest. He won. In 2014, the infamous Kajang move was planned. PKR’s Lee Chin Cheh resigned to make way for Anwar. But it didn’t work out because his acquittal for his second sodomy case was overturned. Wan Azizah had to contest instead.

All this can be very frustrating because it makes it feel like all the hope and faith that the rakyat had have been invalidated. It would seem that the change is just for one man to become prime minister. And it has always been an open secret that Anwar has a strong desire to be prime minister.

Maybe PKR Women’s chief Zuraida Kamaruddin is right when she questioned if the decision made for Danyal to vacate his seat for Anwar was agreed by all within the party. Her reasoning is that the lack of transparency will cause the people to feel that the decision could have been manipulated and that there is a lack of democratic spirit.

But since it isn’t illegal for a move like this to happen, at least in this case, a by-election happens and the constituents still get the opportunity to vote again. If they are unhappy about the fact that the person they voted for initially has been asked to step down, then they can show their unhappiness by not voting for Anwar. But if they are okay, then by all means, vote for the man.

I just think that it is very unethical. But at the end of the day, I cannot say that that I am shocked that this happened. It was already very transparent and clear that this was the move that was being planned all along. It’s just that it is happening so soon that it just reeks of desperation and impatience. They could have at least waited for the Pakatan Harapan government to settle down a bit more.