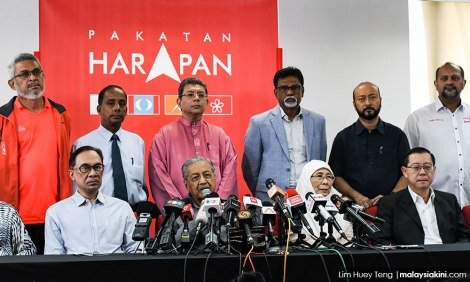 Was voting for Harapan the one stop solution for all problems?
By Zan Azlee

I am slightly worried about how the democratic system in Malaysia is going recently. It’s not so much the fact that there is a new government in the form of Pakatan Harapan. That is a good thing and May 9  will always be a special day in Malaysian history. That is a given and we have to realise the significance.

However, it may seem like there is a problem with this new democracy that we have attained. Firstly, I think many Malaysians are too naive and have a warped perception of the fact that a change is going to solve everything. They need to realise that voting for Harapan is just a step towards change and not a total change by itself.

What I mean by this is that so many voters have the naive and idealistic notion that Harapan will stand for all the changes they want to happen in Malaysia. It is most probably because they have never had a chance to see that their hope can be a reality.

Now that change has been proven to be possible, all the change in the world that we have hope for is thrust upon this one coalition. It would almost seem like we have elected Jesus as the prime minister (oh sorry, maybe I should have said Muhammad, but then I might be labelled blasphemous!).

Was everyone expecting that a political party is going to address everything in their manifesto, let alone every problem under the sky? Sure, they will prioritise the sexy issues like 1MDB and GST. But what about the lesser profile issues like teachers’ administration work or, God forbid, sensitive issues like gender equality or the LGBTQ community?

How naive! For the most parts, a manifesto and campaign promises are given just in order to secure the votes from the people. Once they have won, they will then have to start fulfilling or at least give the perception that they are fulfilling all their promises. Then the excuses start to come out, such as, we need more time, or, it isn’t easy cleaning up a mess.

Look, I think we need to face reality. It would be a miracle if a new government can address all their promises as soon as they take over. It is true that they will prioritise the main issues and slowly move down the list. And it is true that it will most probably take a long time to do. So let’s not act surprised and shocked that this is what’s going on now with Harapan.

We also shouldn’t act like they can solve all problems. The LGBTQ issue is one such issue that we know any political party at the moment will never be brave enough to address positively. What’s the majority perception of LGBTQ? Of course, they would say that it is wrong. Would a political party be willing to push away that significant number of voters?

Of course, they won’t. So it is to be expected that they will come up with sweeping and general statements that would just be based on human rights and freedom, without the specific mention of LGBTQ itself. Mind you, this doesn’t mean I think what they are doing is right. I’m just thinking rationally and logically as to why they would do such a thing from their perspective.

Don’t get me wrong. We should hold them accountable for all the promises they have made. If they are not fulfilling the gender representation in the cabinet, then call them out on it. If they don’t do anything about an 11-year-old child marrying a 41-year-old man, then we demand that something is done. If barbaric public canings of women are being done, we make noise that it shouldn’t.

And if we continue to shout and they still ignore us, then, by all means, maybe next general election, we can just decide not to vote for then again. Now that we know change is possible, what’s stopping us from changing the government through the ballot box whenever we think they are not doing a good job.

Basically, let’s just not act liked we were expecting them to be excellent right off the bat. And since we are supposed to be a proper democracy now, we have to continue our efforts to check and balance whatever comes out in the news. We are the people anyway and they have to listen to us – the fourth estate.

We have an opposition who has never been the opposition ever, from 1963 all the way to 2018. That already puts them at a disadvantage because they will need to learn to do what the opposition does instead of what a ruling government would do, and that is to be the voice of dissent, question, check and balance.

At the moment, the opposition, which is the BN, is just in too much shambles. Then there is the fact that they were voted out due to massive corruption and abuse of power. After everything that has happened, can we even take them seriously?

For example, whenever Najib Abdul Razak, MP for Pekan, says something critical about the financial situation in the government, can we actually look at and listen to him with a straight face? We would laugh and holler thinking that the former prime minister is questioning the government about money. It would be so easy for the government to come up with rebuttals.

So the opposition better buck up and get themselves acquainted with not being administrators and just trying to prove people (the government) wrong. It isn’t difficult. Just bang on your table in Parliament a lot and spew out some damning statistics. Oh, but you would first have to do your research so you get the damning statistics.

We were so disappointed to miss this film in the cinema but now it’s on Netflix! We watched, we discussed and we opined! #Poochandi #Poochaandivaraan @poochandimovie
“Whoah oh oh! Whoah oh oh! Perfect situation!” - Rivers Cuomo, Weezer (2005)
Post new government session! #Basketball #BBallManiax #FridayNightLights
Anwar Ibrahim has been sworn in as Malaysia’s 10th Prime Minister. A long way from 24 years ago when he was sacked as Deputy Prime Minister, sentenced to prison and forming the country’s strongest opposition coalition. His most immediate challenge? Forming a stable unity government that the country desperately needs. @anwaribrahim_my @trtworld #Journalist #Journalism #News #KosongKosongMalaysia #MalaysiaBoleh #KosongKosong #AnwarIbrahim
Haaa!! Where are the selfies with @anwaribrahim_my??? Cepat!! Hahaha!!
Have I not been saying all this while that a unity government is the way forward?? Boom mafakas!!!! Now… let’s hope this government performs with maturity, integrity, responsibility and with the people and country in mind. I believe that all Malaysians can unite and move forward! #KosongKosongMalaysia #MalaysiaBoleh #KosongKosong
More live crosses and no government yet. It seems like Pakatan Harapan are more confident of forming the government seeing that they have partnered with Barisan Nasional to form the state governments in Perak and Pahang. But BN has yet to decide on the federal level. #GE15 #PRU15 #Journalist #Journalism #News #TRTWorld @trtworld
Here’s a little intermission from the frustrating politics of Malaysia. Jack White gives Kuala Lumpur a taste of Nirvana.