Does it take a humanitarian crisis to bring people together?
By Zan Azlee

Dr Jefri: I attended the coordination crisis meeting this morning at the command centre and a realisation hit me.

Me: And what did you realise?

Dr Jefri: Most of the NGOs that are in Bangladesh right now are Western, non-Muslim organisations and they are all putting their full effort into saving the Rohingya.

Me: If only Malaysians could see this.

Dr Jefri: Yeah, it would be a good lesson to learn about solidarity with humankind.

So this is the conversation I had with Dr Jefri Irwan Harris, a volunteer doctor with Malaysian medical NGO Mercy Malaysia. We are all on a mission in the Kutupalong and Balukhali Rohingya Refugee camps in Bangladesh.

Many of you would be familiar with the Rohingya crisis. This ethnic group originating from the Rakhine state in Myanmar are predominantly Muslim. It is believed that their total population stands at two million and 75 percent of them have left Myanmar.

Some of the countries that the Rohingya have run away to in seeking refuge include Malaysia, Thailand, Indonesia, India, Nepal and even Canada and the United States. But a large majority are in Bangladesh, whose government has accepted them in as refugees.

Persecuting the Rohingya for decades

In the last three months, Myanmar has seen one of the largest exodus of the Rohingya people in history. Since August, 600,000 of them have crossed the border into Bangladesh seeking safe refuge from the violence against them back home.

The refugee camp in Ukhiya, Bangladesh, is one of the largest refugee camps in the world. It covers an area of 2,000 acres, which may seem large, but in this space, there are almost 800,000 Rohingya. If you can’t visualise it, let me just say it gets really cramped.

This has to be one of the world’s worst humanitarian crisis since the Holocaust and the world needs to get together to do something about it. The perfect example is what is happening in Bangladesh right now with all the people coming to provide assistance.

There are the big boys, such as the United Nations High Commission for Refugees (UNHCR), International Organisation for Migration (IOM), Medicine Sans Frontieres (MSF) and also many NGOs from different parts of the world, who feel the obligation to provide help.

Mercy Malaysia is one of them. They have two primary healthcare clinics in Kutupalong and Balukhali camps which are manned by volunteer doctors, medical assistants and pharmacists from Malaysia. Each mission for these volunteers lasts for two weeks.

And to refer back to the anecdote I shared with you all about the meeting with Dr Jefri, Mercy Malaysia is one such organisation that is race and religion blind. The staff and volunteers consist of all kinds of people, regardless of race and religion. They all just want to help. 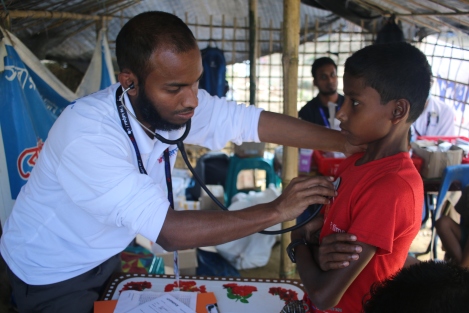 Malaysia can learn a great deal

It is just very reassuring to see that a majority of people around the world still have a sense of humanity in them and are banding together to help fellow humans. With such animosity towards Islam, it is a wonder people still want to help.

Malaysia can learn a great deal from this. With all the cases of racial and religious intolerance being highlighted in the media (and there are a lot in Malaysia), we need to have more positive stories coming out so that animosity and hatred won’t develop.

For example, there is the case with Jakim (Department of Islamic Development Malaysia) preacher, Zamihan Mat Zin, outrightly belittling the Chinese community, and the ultra Malay racist Jamal Md Yunos (photo) and his red-shirts gang trying to fight all non-Malays.

With cases like these constantly happening, and bear in mind that it is mostly all the Malays and Muslims oppressing the non-Malays and non-Muslims, it is a wonder that there still is love for Muslims in Malaysia.

It shouldn’t take a humanitarian crisis to bring people together. Human beings all feel the same feelings – love, anger, hate, pain and suffering. We need to always realise that we are created equal and no one people is better than the other.

ZAN AZLEE is a writer, documentary filmmaker, journalist and academic. He and Dr Jefri Irwan Harris were classmates in secondary school and have known each other for 22 years. They are thoroughly enjoying doing volunteer work together in Bangladesh. Visit FATBIDIN.COM to view his work.