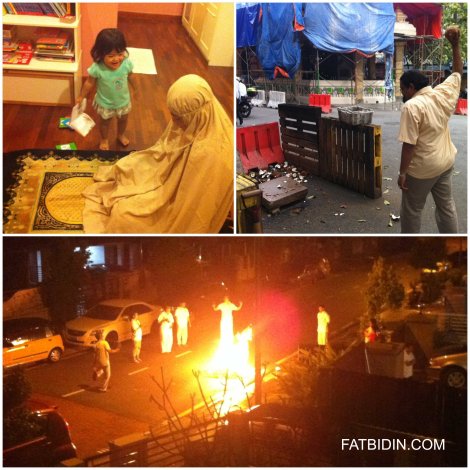 Ya Allah, not this issue again!
By Zan Azlee

A few years back, when I was working in a local Malaysian newsroom, an issue that became quite a debate in the media was the case involving the usage of the word “Allah” by non-Muslims in Malaysia.

At that time, one of my colleagues, a fellow news editor, came up to me to have a chat.

“Wow! Can you imagine that? There are churches in Malaysia that actually use the word ‘Allah’ as God,” he said.

“Yes, there are many churches that have services in Bahasa Malaysia and that’s exactly the word they use,” I replied.

“I don’t agree with that. If I were in a church and heard the word ‘Allah’ being used, I would probably feel very uncomfortable and disoriented.”

I didn’t how I was supposed to respond. He was a Malay Muslim and so was I. Yet, we had two very different opinions. I didn’t really want to get into an argument right then and there, so I just smiled, nodded and kept at my work without pursuing the matter further.

The issue with the word “Allah” being used by non-Malays has been a long-standing one. There have been protests, churches burnt, insensitive and irrational public statements brandished and even court cases surrounding it.

In fact, a court case is currently taking place, in which Sarawakian Jill Ireland Lawrence Bill is challenging the constitutionality of a Home Ministry circular that called for a ban of the word “Allah” in Christian publications for supposedly being a threat to public order.

Basically, the argument to ban the word from being used is because there is a fear that Malay Muslims who hear this might be at risk of being confused and persuaded to leave the faith of Islam, which I think is just ridiculous.

I support the use of the word by non-Malays because the word is not an exclusive nor Muslim word. It had been used to refer to God by many non-Muslims all around the world, even before the existence of Islam.

It really is just a word that means god in Arabic. Just like tuhan in Bahasa Malaysia, san in Cantonese, kadavul in Tamil and whatever else it is in any other language in the world. It is just a word, and I don’t see what the big fuss is about.

In my line of work, I have travelled extensively throughout the Middle East, and in that region, Arabic is one of the main languages. Guess what? Everybody there uses the word “Allah” regardless of whether they are Muslim, Christian, Druze or whatever. It’s just their language.

If you go to Sabah or Sarawak, almost all of the churches there hold services and publish materials in Bahasa Malaysia because it is, after all, our national language. And so they use the word “Allah” to refer to God. They have been doing so for decades.

There shouldn’t be any confusion because Malaysians should be intelligent enough to know the difference. If my former colleague had an ounce of intelligence, he would realise that he was in a Christian church and shouldn’t have been disoriented when he heard the word being used.

Now back to the court case with Jill Ireland. The case is still ongoing and yesterday, the court heard that “Allah” is not an exclusive word to Islam. Several local experts, such as Wan Ji Wan Hussin, Perlis mufti Mohd Asri Zainul Abidin, and even PAS’ Abdul Hadi Awang support this.

One of Jill’s lawyers even stated that revered Malay writer and literary icon Abdullah Munshi had translated the Bible into Bahasa Malaysia in 1852, and had actually translated the word “God” to “Allah” in his version.

So all this talk in Malaysia about banning the usage of the word “Allah” by non-Muslims is ridiculous, and really something that goes against basic human rights and also the country’s constitutional right of freedom of religion.

I feel deeply offended and embarrassed that those who are against the use of the word by non-Muslims, because it makes Malay Muslims seem ignorant and insecure in our own beliefs. As if our faith and understanding of Islam is so fragile.

To my former colleague and everyone who thinks they can be confused, maybe instead of trying to call for a ban and treating the symptom rather than the disease, they should obtain proper religious education and understanding to strengthen their faith instead.

[This article was originally written for and published at Malaysiakini.Com]