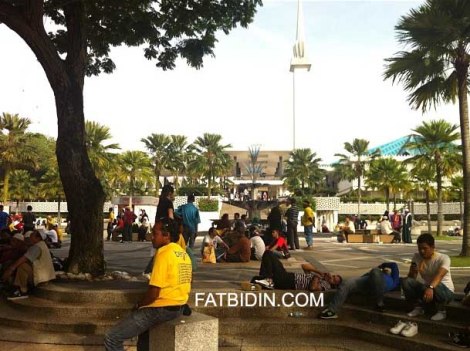 Would Malays contribute to building non-Muslim houses of worship?
By Zan Azlee

I quite hate it when people say that we Malaysians, as a multiracial and multireligious society, need to be tolerant of each other’s culture and religion in order to live in harmony. Why? Tolerance is such a negative word with negative connotations.

The technical definition of the word is “allow the existence, occurrence, or practice of (something that one does not necessarily like or agree with) without interference” or “accept or endure (someone or something unpleasant or disliked) with forbearance”.

So when the best advice that can be dished out to create a happy country is for its people to tolerate each other, then we are in deep trouble. It means that we just pretend to accept each other when deep down, we hate each other.

That shouldn’t be a basis of how citizens of a country are supposed to get along with each other. Instead of tolerating each other, what we really need to do is to understand and accept each other the way we are.

I look at Malaysians today and realise that we are quite polarised racially and religiously. And it seems that polarisation is actually between the Malays and the non-Malays. However, between the different non-Malay ethnicities, there seem to be no problems.

I wonder quite often how all this came to be and the only answer that creeps into my head is the fact that the Malays seem to feel such a ridiculously strong sense of entitlement that makes them just disregard everyone else.

The Malays feel like they have more rights than anyone else and they impose on others. Take for example when it comes to the fasting month. They expect everyone else to respect them for fasting that no one can even eat in front of them.

Why can’t it be that the Malays respect those who aren’t fasting and let them eat in peace anywhere and anytime they want without being so insecure? Is their belief so weak they can be tempted to break their fast so easily?

I wonder if the Malays still remember the history of our National Mosque in Kuala Lumpur which was built in 1963. It was conceptualised right before Merdeka by our first prime minister Tunku Abdul Rahman and it was to symbolise the country’s freedom and the unity of our people.

The cost of the construction of the building was RM10 million. The government actually received a contribution of RM3 million in aid which was given generously from the different ethnic communities who came from non-Muslim faiths.

It was widely known that the Chinese, Indian, Christian, Buddhist and Hindu communities contributed significantly and willingly towards the building of the mosque. And this history of the mosque is something that fills me with pride and happiness.

This to me indicated how important it was to everyone at that time to foster goodwill, respect and acceptance among fellow Malaysians without paying attention to race, religion or creed. It was a spirit of seeing all Malaysians and Malaysians.

Should be progressing instead of regressing

In our state of affairs today, do you think we could see a situation where the Malays would willingly and generously contribute towards the building of a church, temple or shrine? I highly doubt so. I can confidently say that no Malay would be caught dead doing so.

It is sad for me to see that the Malays would always expect to non-Malays to respect them and think highly of them as if they are entitled to it, yet they will not grant that same respect to the non-Malays.

I don’t want Malaysians to be polarised and I don’t want them to look at each other with dislike and animosity.

I don’t like seeing Malaysians fearing and loathing each other because that is not what will make our country develop and prosper in harmony.

We should be progressing as a society instead of regressing. We need to realise that God didn’t create anyone better or more entitled than another.

We are all equal and we are all Malaysians. Nothing else should matter.

So how about it? Can we just see each other as fellow countrymen instead of different people who are so insecure about themselves that everything and everyone different is seen as a threat? It can’t be that difficult, right?

That’s why I don’t like the word tolerance when it comes to promoting multiracial and multireligious harmony in the country.

I want a Malaysia where everyone is accepting and understanding of each other instead of just tolerating.

So I hope the Malays will always remember the history of the National Mosque because it serves as a reminder and an example of how our forefathers wanted the country to be. We would not be honouring them if we forgot.