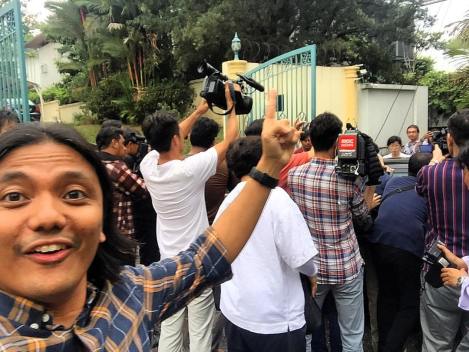 In Korean stand-off, we should stand by our government
By Zan Azlee

It’s been a month since Kim Jong-nam, the half-brother of North Korea’s leader Kim Jong-un, was murdered at the KL International Airport 2. And it has been a month that the world’s attention has again been drawn to Malaysia.

Almost every single major news organisation are now in Malaysia, or at least monitoring the latest developments of the case, which is like something out of an old espionage movie from the 1960s.

The alleged plot is that of a closed and reclusive country’s leader who feels threatened by his half-brother who might return from exile and try to take over power. So he seeks to assassinate the half-brother.

The alleged assassination attempt was successful. Two individuals smeared Jong-nam’s face with a deadly poison which killed him almost instantaneously. And it happened in KLIA2, where Jong-nam was about to take a flight to Macau. Thus, the Malaysian authorities are responsible for handling the incident.

The closed and reclusive country claims that Malaysia is in collusion with their enemies in wanting to ruin their reputation and bring them down. Malaysia, however, really doesn’t have any vested interest in the case.

They’re just doing what they’re supposed to, which is to investigate a crime that was committed on their soil. And now a diplomatic crisis has happened. Accusations have been flung and ambassadors have been expelled.

North Korea has since banned all Malaysian citizens in their country from leaving. There are 11 Malaysians who are stuck there. Two are employees of the United Nations, three are staff of the Malaysian embassy and the rest are their family members.

In a tit-for-tat response, the Malaysian government banned the North Koreans who are currently working in the embassy in Kuala Lumpur from leaving the country, too. However, it is quite obvious which side is actually in danger and which isn’t.

As a journalist covering the case since day one, I find it increasingly hard to maintain a feeling of objectivity as I am Malaysian. And when you see accusations of the integrity of your country being questioned, one can easily become defensive.

I believe that the firmness of Foreign Minister Anifah Aman and Deputy Prime Minister and Home Minister Ahmad Zahid Hamidi in responding to the accusations and threats made by the North Korean government as justified and called for.

Of course, I understand that as a journalist, I need to play the watchdog role and report news as objectively and transparently as possible so that the rest of Malaysia can monitor the actions of our government in handling the incident. I will continue to do that to the best of my abilities.

However, I also understand that as a Malaysian – and this is my call to all Malaysians as well – we need to stand by our government as they do everything in the effort to ensure that our fellow citizens, who are essentially being held hostage in North Korea, are safe and brought home.

Sure, we have our issues with the government and we criticise them a whole lot. But that is just how democracy is. We applaud the good that is done and criticise the bad, and hopefully this process will ensure better governance.

But this is the time when Malaysians need to come together and give our full support to the efforts that are being made to resolve the crisis. We cannot be divided, and we should not politicise the incident because Malaysian lives are at stake.

North Korea have accused Malaysia of not conducting the investigation of the murder professionally and properly. They have questioned the findings of the investigation and says that the post-mortem and toxicology tests are flawed.

But to date, the Malaysian authorities have been transparent in the dissemination of information on the investigation. They have had regular press conferences and have kept the public updated. There has been no question about Malaysia’s transparency on the case.

Now, the two governments are apparently in talks to settle the issue amicably. And I think all Malaysians want that to happen too. We are a peace-loving people who prefer to avoid such international confrontations. So we need to trust our government officials to do what they have to do.

Like it or not, they are the government of the day and they are the ones who now have the responsibility to resolve the issue. So far, they have done what is expected of them. But with tensions escalating, let’s hope they also capable of rising to the occasion.

[This article was originally written for and published at Malaysiakini.Com]