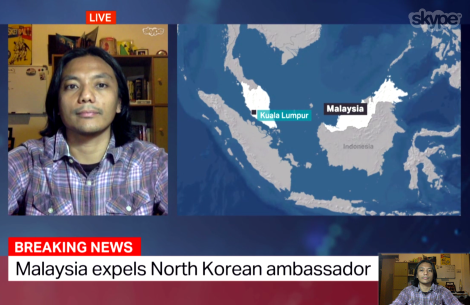 IT’S funny how one of the main talking points to come from the Kim Jong Nam debacle for so many Malaysians (as I’ve garnered through anecdotal evidence and from local coffee shop talk), is that Malaysians do not need a visa to travel to North Korea, and vice versa.

And it is also funny so many people in Malaysia have chosen not to travel to North Korea, despite this fact.

It’s funny because it just proves Malaysia really has no vested interest in North Korea at all.

When it comes to the murder of Kim Jong Nam, the half-brother of the country’s leader Kim Jong Un, the Malaysian authorities have no motivation to conspire with anyone.

Since the murder, the North Korean government has gone on and on accusing Malaysia of conspiring and colluding with external forces in trying to bring down the government (we have yet to hear anything from the Supreme Leader himself, though).

It took a while for the Malaysian government to properly respond to the North Koreans. Initially, Malaysia denied the accusations and continued to release information regarding the case in press conferences and statements.

Eventually, the Malaysian government realised it was hopeless and started making political and diplomatic moves instead.

Anifah continued Malaysia will not dignify North Korea by further responding to any of their claims and allegations.

In preserving the dignity and self-respect of Malaysia, the government proceeded to take the appropriate actions. First was to demand the North Korean embassy provide access to the two people wanted for questioning, and eventually issuing an arrest warrant for one of them.

Then, Zahid, in his capacity as Home Minister, revoked the right for North Koreans to travel to Malaysia without having to apply for a visa (this will be gazetted and take effect today, March 6)

And even then, the North Korean government continued their accusations.

On Saturday, the Malaysian government also declared the North Korean ambassador “persona non grata” which means he is no longer a welcomed individual in the country and had been given 48 hours to leave.

Malaysia is making the right decisions in its responses to the North Koreans as the country stands to gain nothing from pandering to the interest of the isolated regime.

It is North Korea which stands to lose more if diplomatic ties between the two countries worsen.

Although trade exists between Malaysia and North Korea, it is too insignificant to do any damage to Malaysia if halted.

Latest data shows it was worth an estimated US$5 million in 2015, and that North Korea is hoping Malaysia could be its gateway to trade with Southeast Asia.

However, there will be no trade embargo imposed on Malaysian companies that would still want to continue doing business with North Korea, as declared by International Trade and Industry Minister Mustapa Mohamed.

North Korea is one of the most isolated countries in the world and has far more enemies than friends.

Rationally speaking, it would be to their advantage to try to maintain warm diplomatic relations with Malaysia. And the fact is, many of their “friends” have no need for the “friendship”.

We were so disappointed to miss this film in the cinema but now it’s on Netflix! We watched, we discussed and we opined! #Poochandi #Poochaandivaraan @poochandimovie
“Whoah oh oh! Whoah oh oh! Perfect situation!” - Rivers Cuomo, Weezer (2005)
Post new government session! #Basketball #BBallManiax #FridayNightLights
Anwar Ibrahim has been sworn in as Malaysia’s 10th Prime Minister. A long way from 24 years ago when he was sacked as Deputy Prime Minister, sentenced to prison and forming the country’s strongest opposition coalition. His most immediate challenge? Forming a stable unity government that the country desperately needs. @anwaribrahim_my @trtworld #Journalist #Journalism #News #KosongKosongMalaysia #MalaysiaBoleh #KosongKosong #AnwarIbrahim
Haaa!! Where are the selfies with @anwaribrahim_my??? Cepat!! Hahaha!!
Have I not been saying all this while that a unity government is the way forward?? Boom mafakas!!!! Now… let’s hope this government performs with maturity, integrity, responsibility and with the people and country in mind. I believe that all Malaysians can unite and move forward! #KosongKosongMalaysia #MalaysiaBoleh #KosongKosong
More live crosses and no government yet. It seems like Pakatan Harapan are more confident of forming the government seeing that they have partnered with Barisan Nasional to form the state governments in Perak and Pahang. But BN has yet to decide on the federal level. #GE15 #PRU15 #Journalist #Journalism #News #TRTWorld @trtworld
Here’s a little intermission from the frustrating politics of Malaysia. Jack White gives Kuala Lumpur a taste of Nirvana.