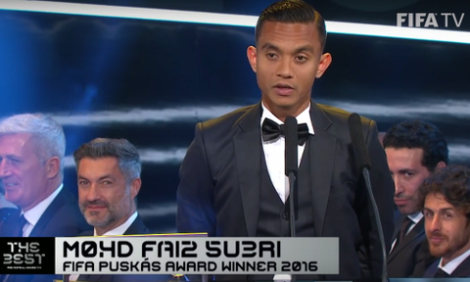 Congrats Faiz, but here’s the real issue
By Zan Azlee

Here I go joining the bandwagon of all the commentators who have been wagging their tongues after Penang football player Faiz Subri won the most votes and was awarded FIFA’s Puskas Most Beautiful Goal of 2016.

First of all, we must congratulate the young man for winning. It is an achievement even though it is just a single goal. Just looking at the way he approached and took the free kick, it is obvious that it was intentional and he knew what he was doing.

It was not a fluke and any footballer will tell you that he did it correctly and that the move is a result of a commitment to training and practice. Sure, he may be an unknown. But he deserves the win and he deserves all the accolades that goes with it.

Now to respond to the issue of how Faiz delivered his acceptance speech and his command of the English language. In all honesty, it does not matter. He is a footballer and he does his talking on the pitch, as he did when he scored that beautiful goal.

Faiz wrote out his speech and he read from it. His pronunciation and enunciation was weak. But again, it does not matter. He already spoke loud and clear in a language that everybody understands in that context, and that is through football.

He fumbled with his smartphone while looking for his speech. So what? It’s not a big deal. If he had written it on a piece of paper, there would also have been a risk of him fumbling in his pockets looking for that piece of paper.

It’s just a different form of fumbling. It isn’t less dignified just because it was a smartphone instead of a folded piece of paper. Technology develops and progress. Stop being stuck in the past.

You may remember that I criticised how our Deputy Prime Minister Ahmad Zahid Hamidi presented his speech last year in September at the 71st Session of the General Assembly of the UN in New York. That one was particularly horrendous.

I admit to having a double standard. Zahid is a national leader and representing the country by speaking. He was suppose to deliver a message through his speech. His talking was supposed to do the talking. This is different than Faiz where his amazing goal was the main message.

We can definitely cut the deputy prime minister a break for his lack of English language skills. But the fact of the matter is that he was probably criticised and ridiculed because he really isn’t a well-liked politician and leader.

It could have well been different if he was more respected. Then I am sure the jokes that were being created and shared about all over the Internet would have not been as severe as it was. Face it. People just wanted to turn tables and have an opportunity to laugh at him.

So what’s the real issue?

The real issue as to why Faiz’s speech is being given the spotlight is the dismal quality of English language education in Malaysia. It is obvious that the English speaking skills of our countrymen has fast been declining.

We have had many examples of school-leavers being unable to compete in the workforce, or for that matter even just entering the workforce, due to their poor command of English, whether it be written or spoken.

Without taking away the importance of our national language Bahasa Malaysia, we Malaysians need to realise that English is an extremely important language too. It is the global language of communication, education, business, trade, politics and everything else.

It is good that we continue to push and highlight to the authorities the fact that English is an important language to master. We need to ensure that the standard doesn’t drop further until the day where English really becomes a foreign language in Malaysia.

However, it is unfortunate that Faiz has to become the example of the moment, and it is definitely unfair for him. He is a footballer for crying out loud. So let’s just cut him some slack. He is a young man that just won an international award and brought pride to the country.

In the meantime, I would like to wish a hearty congratulations to Faiz Subri and thank you for representing Malaysia and making us all proud!

ZAN AZLEE is a writer, documentary filmmaker, journalist and academic. He doesn’t really play football and prefers basketball instead. But he can appreciate a beautiful goal. Visit FATBIDIN.COM to view his work.

One response to “Congrats Faiz Subri, but here’s the real issue”