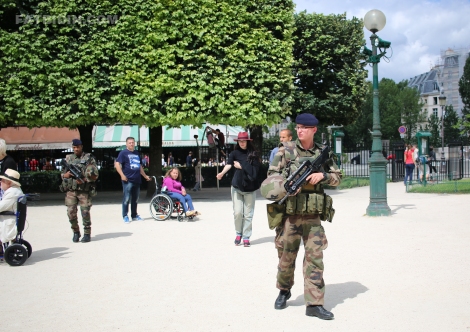 Bastille Day attack in France: Good will triumph over evil
By Zan Azlee

We have all heard the news of the terrorist attack that happened in Nice, France, earlier today. It’s Bastille Day and the French were celebrating ‘liberty, equality and fraternity’.

At the time of writing, more than 80 people have been confirmed dead and almost 20 injured. They were all gathered together enjoying a fireworks display.

A man drove a truck onto a sidewalk and mowed down all the innocent people who were there. Police managed to shoot him dead and stop the truck before more were killed.

This is in spite of the state of emergency declared by the government after two previous terrorist attacks. I was in Paris only last week and the military presence all over the city was massive.

Bring it closer to home and if you’ve been observant, the military and police presence in Malaysia, specifically Kuala Lumpur, has been massive as well.

Just like France, we have received threats from the IS as well. If you remember, there was an IS video released with a Malaysian member of their group threatening our police and our people.

Malaysians have been forwarding supposed target areas on social media and warning each other from going to these places. Most of these places are gathering points such as shopping centres and tourist areas.

I am against this form of rumour mongering. In fact, even if the information is true, I am against telling people that we need to avoid these places because it would mean that the terrorists have won.

That is the one of the reasons why my family and I still decided to go to Paris even though I knew the country was on high alert (and this state of emergency has been extended). We must not be intimidated.

But this is not something easy to do. The need to protect your immediate family members is very strong. Being afraid and just staying home can be a much better option for many people, and they cannot be blamed for that.

So what kind of life are we leading now? When fear dominates the decisions we make and take? Do we succumb and not do anything to improve the situation? And if we want to do something, what can we do?

I have no answers and solutions to give. This is the reality of how the world is now, from the United States, to France, and even here in Malaysia. Have the terrorists won?

I did not intend this article to head in this direction. I don’t want to sound so pessimistic. So think about it. This is something affecting the entire world and I know it is safe to say that together, we definitely outnumber the terrorists.

So we may be afraid right now. But that doesn’t mean we should give up in the fight. Maybe for now, we should just do what we can no matter what it is.

It could be acting in strong defiance of the terrorists and continue to lead life as usual, or it could just be as simple as condemning the ideas and acts of these terrorists amongst friends and family.

The fact of the matter is that there are more people who are against the ideology of the terrorists than there are terrorists. So we need to hang in there. I still believe that good will always triumph over evil when it comes to humanity.

The Fat Bidin Film Club (Ep 231) – Prebet Sapu
Prebet Sapu is a Malaysian film that has been making the rounds in the international festival circuit. It’s about a ride share driver who is trying to eke out a living in Kuala Lumpur and he makes a friend.

The Fat Bidin Film Club (Ep 231) – Prebet Sapu
Prebet Sapu is a Malaysian film that has been making the rounds in the international festival circuit. It’s about a ride share driver who is trying to eke out a living in Kuala Lumpur and he makes a friend.