What? There’s a huge amount of oil and gas in the South China Sea?
By Zan Azlee

Today, the Permanent Court of Arbitration in the Hague has ruled against China in a case brought by the Philippines regarding territory and ocean sovereignty in the the South China Sea.

Although the case was brought by the Philippines, other countries which include Malaysia, Taiwan, Vietnam and Brunei, are also claiming their stake.

China, however, has decided to ignore the ruling by the Hague and says that they will establish an Air Defence Identification Zone (ADIZ) in the area if need be.

What that means is that they will set up an airspace that will require any passing aircraft to follow their rules when it enters the area.

China has been quite aggressive in staking what they think is their territory. They have been building artificial islands and sending out large trawlers (one is even in sight of Miri, Sarawak).

This has been received without any welcome by the other countries. In fact, the United States, which should not have any say in this region, has also come into the game.

They have sent their naval vessels to patrol the area, claiming that they are just there to ensure the safety of air and shipping routes in the area. 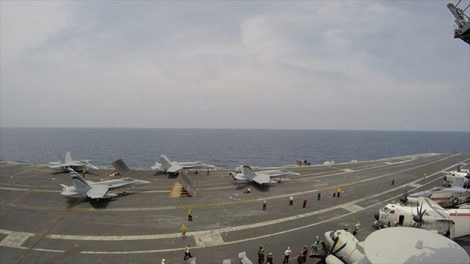 A cluster of fighter jets waiting to take-off on the USS Carl Vinson.

I have even been flown on to the US’ USS Carl Vinsen to observe their operations in the South China Sea.

Now, both China and the US are actually at risk of literaly militarising the area. Below is an image (sourced from the BBC) that shows the disputed territory: 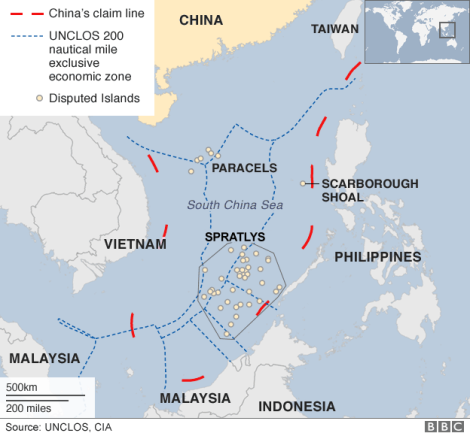 So why is the South China Sea such hot property that everyone wants to have a stake in it?

For one, the area is a major shipping and air route. And, it is also a large area where fishing takes place and this is quite a significant industry for the people in the region.

This is the killer fact – the US Energy Information Administration estimates that the South China Sea holds about 11 billion barrels of oil and 190 trillion cubic feet of natural gas.

Now doesn’t that put everything into perspective? Why wouldn’t these countries actually want to take up arms to put their feet into the waters (excuse the pun!)?

Now, according to a report by the Wall Street Journal, no country, including China, are actually anywhere near to being able to tap into the resource that lies beneath… yet!

So it looks like this area is going to be a huge international hot spot if things don’t get settled. Looking at history, we all know how crazy things can get in the world when it’s about oil and gas.