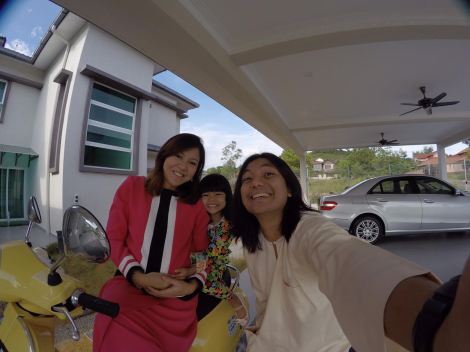 Pakchic says: A four-year-old can still learn about financial literacy!
By Zan Azlee

I don’t like the book Rich Dad, Poor Dad by Robert T. Kiyosaki because it doesn’t really give you any added value information. Basically, he just regurgitated common sense in the book.

Of course I was lucky because I had parents who saw the importance of educating my brothers and I about financial literacy from a very young age.

And it wasn’t like they sat us down and explained everything in one go. It was more just normal exposure to how they managed their finances and in our everyday conversations.

I’m glad for it because it help me to avoid so many mistakes that my peers have made, such as falling into credit card debt, not investing as early in your career as possible, etc.

With little Athena, I’m hoping to do the same thing. But, I’m busting my head as to when would be a good age to start. I don’t remember when my parents started with me.

So when Hari Raya was about to come and that would mean tons of duit Raya, I thought what better time to start! Oh, and she’s four years old, by the way.

Athena already has some sense of money. Whenever we’re browsing at a toy store, she would always ask me, “Pops, do you have money to buy me toys?”

But that’s as much as she knows about what money can be used for! It’s all about the toys!

So on the first day of Hari Raya, my wife and I prepared a small handbag for Athena to carry around and we told her to put all her duit Raya packets inside so she won’t lose it.

I told her that it’s important she keeps the money and not lose it because she had to imagine losing her toys and how that would make her feel. She said she understood.

And as expected, all the relatives started giving her duit Raya, from her grandparents, grand uncles and aunties, uncles and me. She was excited, to say the least!

But she was most excited not because of the amount that she was receiving, but by one particular duit Raya packet that my brother had given her. It was a Frozen-themed packet!

I’d call Athena over every once in a while to ask her to pass me her duit Raya, and telling her “I’m saving your money in your bank account so you can use it when you need to, okay?”

She asked me what a bank account is and I told her it’s where we keep money so we don’t lose it. “Oh” she said and gladly and smilingly handed over her duit Raya to me.

But then she looked at me menacingly and said, “Pops, you can take all of my duit Raya, but do not take my Frozen duit Raya! That’s mine! Do you understand?”

I nodded and smiled. Oh well, I thought to myself. At four years old, she’s probably still too young to understand the full concept of money.

The important thing is that I’d never talk down to my daughter and always assume that she can understand things as long as I explain it properly.

Once the Hari Raya weekend ended and all the duit Raya giving started to die down, Athena said, “Pops, once there’s enough in my bank account, we can go and buy a really big toy. Right?”

[This article appeared originally at MakChic.Com]

Unfortunately, in Malaysia, everyone has been conditioned to think a clear two-thirds majority is the only way for a government to function. But does it really have to be that way?
Celebrating Malaysians who help form the nation into the melting pot of arts, culture and enterprise that it is today. @sherilabustaman wrote this in conjunction with #MalaysiaDay.
The Sabah state government recently rejected the Federal's plan for a law restricting propagation of non-Muslim religions. I think that's great! We in the Semenanjung should check ourselves and see if we actually have deep relationships with those of other races and religions other than the people who we just greet on a superficial level.
Today’s office… across the road from the entrance of Parliament. Live crosses for @trtworld on #Malaysia’s first day of Parliament under new Prime Minister #IsmailSabri. Looks like an MOU/CSA is happening! Positive step for Malaysian politics? Let’s hope so. #JournoDad #Journalist #TRTWorld
It’s been months but we’re back mafakas!! Glad that my basketball buddies aren’t anti-vaxxers! #BBallManiax #FridayNightLights #Basketball
We can't stay locked down forever. So let's just manage Covid-19 and get on with life when it's obvious that we can’t eliminate it totally.
Started to do 10km runs again because 5km daily runs are for the weak! 😂😂 Just kidding. I think I’ll do a 10km run once a week. The dailies will still be 5km lah. I still want to be alive for most of the day! MUAHAHAHA! (I still can’t beat @im.ok.man’s pace lah!!)
When you’re born beautiful…