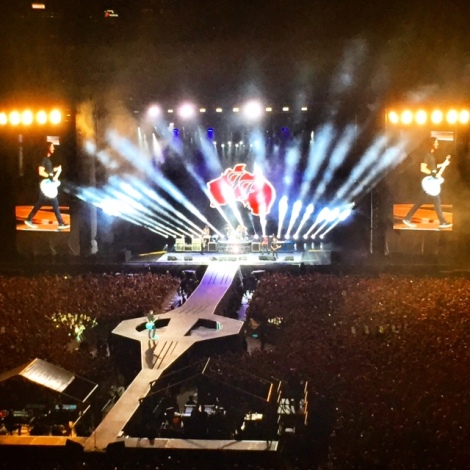 Zan Azlee took this photo while attending a Foo Fighters concert as an audience member. So he owns the copyright!

What’s up with the Foo Fighters’ concert photography contract? Are they trying to show off their superpowers or something? The Washington City Paper recently decided to boycott taking photographs at the Foo’s concert because their photography contract is just too terrible.

The paper wrote: ‘ If we signed it, we would have agreed to: the band approving the photos which run in the City Paper; only running the photos once and with only one article; and all copyrights would transfer to the band. Then, here’s the fun part, the band would have “the right to exploit all or a part of the Photos in any and all media, now known or hereafter devised, throughout the universe, in perpetuity, in all configurations” without any approval or payment or consideration for the photographer.’

What this means is that a journalism organisation is being forced to sign away editorial control and that is just something that is just wrong. So the paper will be sourcing photographs from fans who are attending the concert instead. And these fans will be paid and also retain the copyright of their photos.

Apparently, the Foo Fighters’ management told the paper that the contract contains standard terms. But the paper argues that other big bands like The Rolling Stones don’t demand such ridiculous terms.

Go to the article at The Washington City Paper to see a copy of the Foo Fighters’ concert photography contract.

You disappoint us Dave!

One response to “The Foo Fighters are screwing journalists! WTF Dave??”