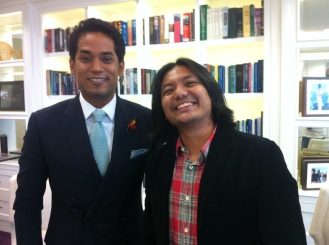 I do not agree with race-based politics. There are many examples that actually show how detrimental it is to national harmony in Malaysia.

Recently, I had the opportunity to have a sit-down interview Khairy Jamaluddin, the Minister of Youth and Sports, and he shared with me some of his views.

As we know, he is also the Youth Chief of Umno, a political party that serves to protect the interests of the Malay community in the country.

Khairy says that there is nothing wrong fo r a community to want to protect their interest as long as it doesn’t override the interest of national harmony.

“Politics based on ethnicity that pits one race against another, or the politics of hate and fear, is something that is not on,” he says.

He adds that it is totally fine for groups to protect the rights of different religious communities such as the Muslims, Hindus, Christians, and whatnot.

Khairy is also against extremist voices and hate-speech. He believes that there should be clearer legislation to eliminate this from continuing

In theory, I do agree with what he says. However, my point of contention is that there has been too many incidents that just shows the negative side of race-based politics.

I have the opinion that it is through decades of race-based politics that we see how segregated Malaysia is at the current moment. [Click to read the full article at English.AstroAwani.Com]