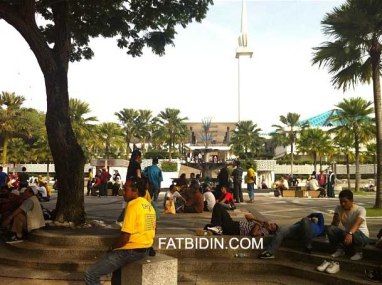 Last week, I wrote in my column here that I am not one of those who are boycotting McDonald’s or Starbucks Coffee.

The reason I am not boycotting them is because I feel that the problem lies much deeper than just fast food companies and designer coffee.

I wrote that the backers of the Israel government had too much clout that a mere boycott of a few companies will not do any damage. Instead, locals get hurt more.

I also wrote that for something to actually hurt the Israel government, it has to be big and prominent enough.

I also said that governments that trade with Israel by proxy because they didn’t want to be seen as ‘trading with Israel’ should also cease what they are doing.

Read my column last week carefully. I also didn’t belittle the thousands who have decided to boycott McDonald’s and what not.

How can you blame them? Without the right facts and information, they actually believe what they are doing is right.

But when the boycott turns out to be just plain vandalism and bullying, then how do you justify it as being right?

Outlets being damaged, workers being attacked an assaulted, their children being shunned in school. How does that help the Palestinians?

The response that came in regarding my column last week were amusing to say the least, although a few agreed with what I had to say, many condemned me.

They accused me of being a Jew, an infidel, a hater of Muslims, an associate of the devil and a lot more colourful words and phrases.

That’s fine by me. I’m a big boy and I can definitely take criticism. Anyway, a little bit of name-calling just makes things a little bit more interesting.

But here’s the thing. I wonder what these people who are condemning me so strongly are thinking about the statement made by the Palestinian ambassador to Malaysia?

Dr. Anwar Al Agha yesterday said that it would be much better if people actually pressured and lobbied against the Unites States rather than boycott McDonald’s. [Click to read the full article at English.AstroAwani.Com]

The Malaysian Court of Appeal has dismissed #NajibRazak’s appeal against his conviction for corruption. However, they have granted a stay of execution pending an appeal to the Federal Court. #1MDB
Educating #TheBustAzleeMafakas about the best nature broadcaster ever! Rest in peace #CrocodileHunter #SteveIrwin #AlFatihah #GorgeousSheila #BeautifulColourisation #Crikey
My daily running photos… back by popular demand! Boom mafakas!
We review an oldie but goldie! #Sepet can be viewed on one the newest streaming platforms, @kinidiamedia, out there for free right now! #YasminAhmad
Biniku @sherilabustaman cas poet!! Hahaha!! But I do think it’s quite good! So go order now! Then put on a beret and snap your fingers mafakas! Heheh!!
They say basketball never stops. But it does for us… when the ankles and knees scream out “Hokay!! That’s it for the week!”. 😂😂😂 #Basketball #BBallManiax #FridayNightLights
Most Malaysians are no longer fooled by these politicians who are trying to gain political mileage out of nothing but being ridiculous.