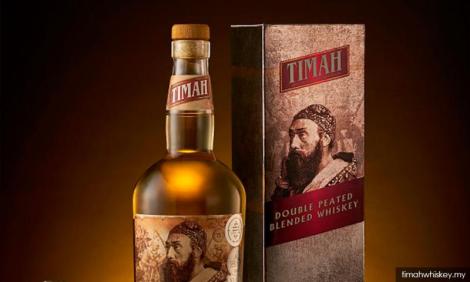 I know that the Timah whiskey issue is a waste of time to think about. It’s just a name and it shouldn’t be made into such a big fuss.

The fact that it was brought up in Parliament was just ridiculous. This same ridiculousness has happened so many times over the years. There was the ‘hotdog’ issue, and then the ‘root beer’ issue. It’s just ridiculous. I did write about it last week.

But this week, as much as I wanted to forget the whole debacle, I couldn’t help but think a little bit more about it. I guess yellow journalism runs strong in my veins. We don’t want to give it much attention, but the satisfaction of bitching about is just so… satisfying!

In all the discussions that I have had about this issue, and this includes even being on talk shows and panels talking about it, many people have expressed that this is an indicator that Malaysia is regressing.

They say things like “What is happening to Malaysia?”, “When did our society become so close-minded?” or “Are we becoming a Taliban state?”.

However, I think that this particular incident with the Timah whiskey proves that this is exactly the opposite.

First, let’s try to observe and think about who actually made any fuss about the whiskey’s name. As far as I can see, the only people who have been fussing about it are politicians.

PKR’s Tangga Batu MP Rusnah Aluai brought it up in Parliament with the ridiculous analogy of it being “like drinking a Malay woman.” Then, other politicians followed suit.

What about the members of the public?

The loudest noise came from the so-called liberals and urbanites who say that it is ridiculous. Yeah, sure. It is ridiculous and we should call it out for the ridiculousness of it all.

Were there any other people who made a big fuss about it? There were no big groups supporting the ridiculous politicians. Not a single civil society organisation did so.

There were no protests after Friday prayers in the streets of Kuala Lumpur (or anywhere in Malaysia) calling for the banning of the Timah whiskey. Basically, nobody came out to support what Rusnah and others who echoed her said. They were on their own. So much so that she had to issue an apology on the matter.

This wouldn’t have been the case a decade ago. Then, politicians would pick up issues like this and make a fuss just so that they could show that they were supposedly ‘upholding the religion of Islam’ or ‘fighting for Malay rights’.

Also then, a majority of the rakyat from middle Malaysia would fall for it and they would run to these politicians bolstering up the support.

It was obvious that these politicians didn’t really believe in their ridiculousness anyway. It was done just for political mileage, and in the process, manipulate the people for their own individual benefit. It sounds dirty and unethical to me and it should for you too.

But let’s come back and look at what has transpired with the Timah whiskey issue. Since nobody gave any positive remarks to Rusnah and the rest who decided to jump on her bandwagon, nothing happened.

It goes to show that most Malaysians are no longer fooled by these politicians who are trying to gain political mileage out of nothing but being ridiculous.

I would say that is progress for Malaysia. In fact, more than a decade ago, politicians who said things like this wouldn’t even have apologised. They would just go on as usual. I know that Rusnah’s apology really sounded like a non-apology, but at least she still felt pressured enough to have to make a statement about it.

As we move forward, politicians will know that they can’t be ridiculous anymore if they really want to get the support of Malaysians. They would have to actually focus on real issues like the economy, social issues, poverty, corruption and governance for a change.

So good for Malaysians for showing these politicians up.

So that is why I think that Malaysia is moving forward and progressing rather than regressing. But we’re doing it in true Malaysian style – Malaysia Boleh! Tapi lambat sedikit (but a bit slow)!

Biniku @sherilabustaman cas poet!! Hahaha!! But I do think it’s quite good! So go order now! Then put on a beret and snap your fingers mafakas! Heheh!!
They say basketball never stops. But it does for us… when the ankles and knees scream out “Hokay!! That’s it for the week!”. 😂😂😂 #Basketball #BBallManiax #FridayNightLights
Most Malaysians are no longer fooled by these politicians who are trying to gain political mileage out of nothing but being ridiculous.
This is from #Halloween weekend a couple of weeks ago! Guess who is dressed as who? First person to get all the characters right wins a prize! #TheBustAzlees #TheBustAzleeMafakas
'Woke AF' films are the most annoying things in the world. Luckily, #SaBalikBaju doesn't fall under this category! Hahaha! Have you watched it yet?
Finally! Physical events! #FatBidin is back preventing and countering violent extremism! #PCVE #PVE #CVE #DigitalResilience #Workshop #SEARCCT #Bromance #FuckingFilmmaking @searcct @sherilabustaman
Game face mafakas!! The shoes do not maketh the man! Haha! #Basketball #BBallManiax #FridayNightLights #JLinOne #JLin7
I wouldn’t want to chew on Ramly’s burger or take a bit out of Ali’s tongkat!

The Fat Bidin Film Club (Ep 239) – Sa Balik Baju
The story of six women who are navigating through life with social media at the forefront.

The Fat Bidin Film Club (Ep 239) – Sa Balik Baju
The story of six women who are navigating through life with social media at the forefront.