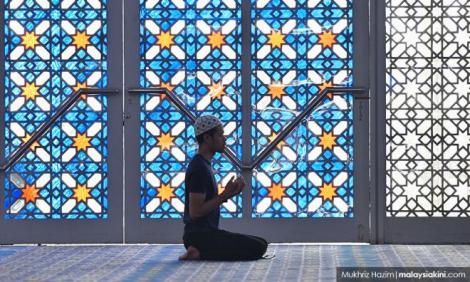 As much as we hope for progressive change after a historic general election in Malaysia, we must also expect that certain things might not go the way we want them to. Case in point is when recently, in Terengganu, six Muslim men were caught not going for Friday prayers and sentenced to one month in prison with a fine of RM2,400 and RM2,500.

According to news reports, the men were on a family vacation at the Sekayu waterfall in Terengganu, when religious officials (women, of course, since the men were at the mosque) saw them. They then waited for the male officials to come over and conduct the raid once Friday prayers were over.

The father of the group was given a higher fine of RM2,500 than the rest (which includes two teenagers) because according to the court, as the head of the family, he was supposed to be a good example. This is the first time a case like this (related to Friday prayers) has happened in Terengganu.

In November 2016, the Terengganu state assembly had passed a bill to amend the Terengganu Syariah Criminal Offences Enactment (Takzir) 2001. The amendment stated that men who skipped Friday prayers without any valid reason could face a fine or RM3,000 or a jail term of up to two years.

Just because something is law doesn’t mean it is just.

Several legal and human rights groups have come out saying that the sentencing of the six men are not right. Lawyers for Liberty, through their legal coordinator, Zaid Malek, said that not attending Friday prayers is a personal matter and the state should not be interfering in these matters.

Zaid urged the Minister of Religious Affairs, Mujahid Yusof Rawa, to address the situation because the minister had said before that penalties are supposed to be rehabilitative instead of punitive. This case shows that criminal punishment meted out is excessive and not reflective of the so-called crime.

The Bar Council also came out to slam the sentencing of the six men. Council President Abdul Fareed Abdul Gafoor said that the punishment was too harsh in view of the offence and also considering the age of the offenders.

He said that although there is a binding law, justice must be served compassionately and with mercy.

All six men are apparently out on bail pending an appeal.

Personally, and I think that many Malaysians are of the same opinion with me seeing that I have received numerous messages my readers and YouTube followers relating to the matter, I feel that we need to separate religion from the state. We can still have an official religion of the majority but a separation is the way to go.

Religion is a personal matter between a believer and his or her faith. For the faithful, myself included, we make efforts to learn and understand our religion as best as we can and try to live our lives according to our faiths. We do it out of sincerity and because we want to show our appreciation to our faith.

I am a Muslim and I do go for Friday prayers. Admittedly, there are times that I don’t go for a myriad of reasons. But these reasons are for me to know, understand and come to terms with, as I reconcile what I do with what my religion tells me to. I feel that I do not have to discuss this with the world if I do not want to.

As we all know, Islam is a religion that is compassionate, merciful, just and, very importantly, moderate. It calls for its believers to live and let live because we have no right to judge others as judgment is left to only God. There is also no compulsion in Islam and forcing religion on the people does not make their actions sincere.

What has happened, and if not addressed by our religious authorities properly, means that Malaysia will portray Islam as a religion that is harsh and forceful. How then can we show the kindness of the religion and its people when we can’t even show compassion, mercy and understanding?

Mujahid (above) has several times mentioned that we want to create a more tolerant environment in Malaysia when it comes to Islam as the religion of the majority. With this case, it shows that we are moving backwards and becoming more archaic in our practices. So I think it is important that the minister walks the talk and does something instead of staying silent.

I am going to be realistic. Malaysia is a religiously conservative country, and there really is nothing wrong with that. So for now, we can continue to have a dual judicial system (civil and syariah) but we must be able to do so in a tolerant, compassionate and moderate way. We cannot be extreme and iron-fisted about it.

We complain about the rampant spread of Islamophobia among non-Muslims (and even Muslims!) but how do we expect to address that when we practice Islam so forcefully and insensitively? Where is the love in the religion that we talk so much about? Like I said, if we do not address this matter, we will just push everyone away.

A week ago, Alethea told me she was making a surprise for Mum (@sherilabustaman) in school for #MothersDay! It’s a bag! How do I compete with that?? #HappyMothersDay #TheBustAzlees #TheBustAzleeMafakas
No need to thank me @sherilabustaman and @sophiayusof!! I know that I have given you two the blessed opportunity of becoming mothers!! 😎😎😂😂 I love you both very much! #HappyMothersDay!!
When you’re just too fast for the defence to catch! 😎😎 #FastBreak #EasyBasket #Basketball #BBallManiax #FridayNightLights
Personally, I feel that the pros of keeping schools open more than outweigh the cons. #MCO #PKP #Covid19
Ramadan #basketball session + sahur! #BBallManiax #FridayNightLights
The prolific #MamatKhalid returns with another tale from #KampongPisang! #18PuasaDiKampongPisang #18Puasa #KampongPisang @khalidmamat @astroshaw
Buka puasa with this bunch of IG stalkers and then a round of #JustDance on the #Nintendo!! #TheBustAzlees #TheBustAzleeMafakas #YoungArif #FatBidinHQ
@sherilabustaman meets different Malaysians who are doing their best to be kind and she implores everyone to do the same!